DETECTIVES from the PSNI’s Major Investigation Team have arrested man today over the the paramilitary murder of Michael McGibbon.

The 34-year-old is currently being processed and interviewed at Musgrave PSNI station in Belfast on suspicion of the murder.

Earlier today, the PSNI made a fresh appeal for information about the savage murder of an innocent man.

A police spokesperson said: “Detectives investigating murder of Mr McGibbon ask the community to come forward with any information that could help bring his killers to justice.

Mr McGibbon, a taxi driver, was shot three times in the leg in an alleyway at Butler Place close to Elmfield Street, near the Crumlin Road at about 10.05 pm Friday night.

The father-of-four was tended to by his nurse wife before paramedics arrived on the scene.

The victim was taken with what police described as serious injuries to the Royal Victoria Hospital in west Belfast.

Despite the valiant efforts of doctors, the father-of-four died from his injuries.

At a press conference yesterday, Detective Superintendent John McVea said: “Michael was brutally and callously shot a number of times in the leg in an alleyway in a densely populated urban area.

“Despite the best efforts of his wife Joanne immediately after the attack, she was unable to save him and Michael tragically passed away following emergency surgery at the Royal Victoria Hospital.

“What happened in that alleyway last night robbed a family of a treasured husband and father.

“There is nothing that can justify or explain the senselessness of this murder. And let’s be clear, that is what we are talking about here, murder.

“Michael McGibbon was a local man. As I’ve said, he was a husband and a father. He was also a taxi driver who was well known in his community.

“He was a man with no criminal record, no apparent criminal connections or associations and today we are talking about his murder.  There is no rationalising that.

“This killing bears all the hallmarks of a paramilitary murder. Those who carried it out have no legitimacy in this community and today I am asking the community to help us find them.

“I am appealing in particular to two males who called at the McGibbon home late in the evening of 14 April. These men asked Mr McGibbon to step out of the house. When he refused, they stated that they would be back.

“The first male is described as in his early twenties, slim and was wearing a red hooded top, baseball cap and had a scarf over his face.

“I am asking these men, or anyone who knows their identity, to get in touch with police. If there is an innocent explanation for your presence at the house on Thursday night, allow us to eliminate you from this enquiry.

“I am also aware that other people in the area may also have been visited in a similar manner in recent days and I asking for these people to make contact with police.

“Finally, I would like to reiterate that the support of the community and local information will be vital in this investigation.

“If you were in the area last night or if you know anything that could potentially assist with our investigation, then please call the incident room at Ladas Drive on 028 90700303. 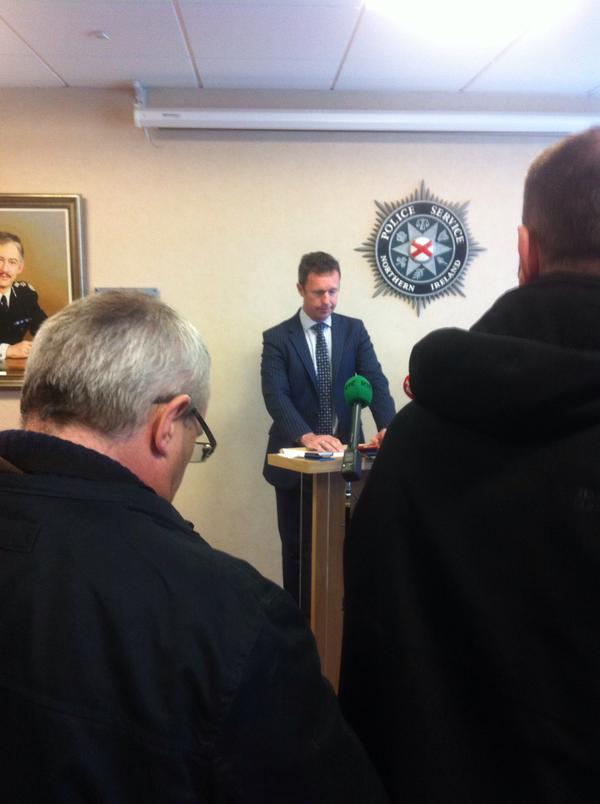