ARRESTS MADE OVER EASTER MONDAY RIOTING 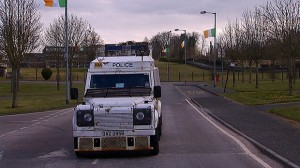 POLICE have made a number of arrests in connection with serious rioting in Lurgan on Easter Monday.

A 46-year-old man has been arrested on suspicion of affray and assault causing actual bodily harm.

A a 44-year-old man has been arrested for affray and obstruction.

Meanwhile, a 21-year-old man has also been arrested on suspicion of affray, possession of an offensive weapon and assault causing actual bodily harm.

All three are currently being questioned at Lurgan police station.

Two officers were injured after petrol bombs were thrown at police when trouble flare.

The rioting erupted overnight on Monday, March 28 in the Kilwilkie area of the town.

Previously a van had been hijacked in the area.