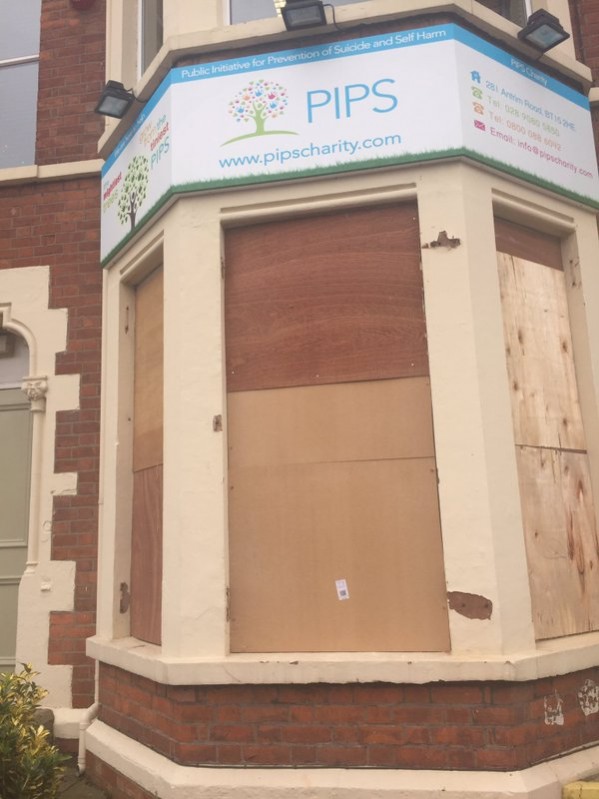 POLICE have arrested a man in his 40s after a charity’s offices in North Belfast were vandalised last night.

The PIPS charity’s building on the Antrim Road had its windows smashed.

It’s claimed that the man arrested attempted to throw a brick through the front window but it bounced back and struck him.

A number of people were inside at the time but were uninjured.

The charity wrote on its Facebook page last night of their thanks to those who helped with the clean-up.

This followed an appeal by the charity on social media for assistance in mending the broken windows.

They said: “I would just like to thank the amazing board, staff, volunteers, family group, and friends of PIPS for all their help and support tonight.”

The PSNI has confirmed they arrested a man at the scene and he’s currently being treated for head injuries.

A police statement said: “Police are investigating criminal damage at a property on the Antrim, Road in north Belfast last night, Wednesday 13 April.

“At around 8.25 pm it was reported that a male was smashing windows of the premises.

“Police attended and a man, aged in his 40’s, was detained and is currently being treated in hospital for a head injury.”