SCHOOLGIRL STRUCK DOWN WITH HYPOTHERMIA RESCUED FROM MOURNE MOUNTAINS 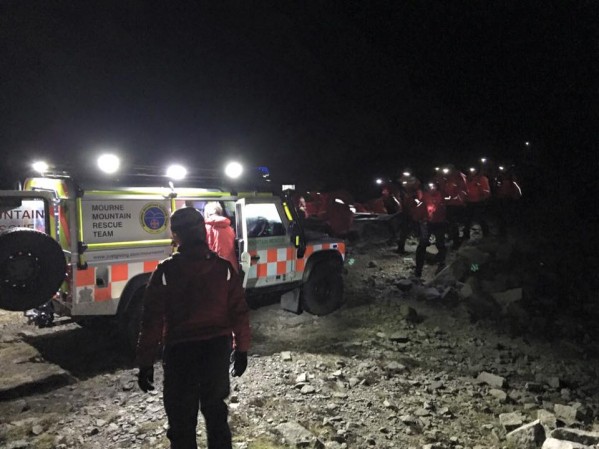 A SCHOOLGIRL was been treated for severe hypothermia after she lost consciousness during a Duke of Edinburgh expedition in the Mourne Mountains, it has been revealed.

The Mourne Mountain Rescue Team was called to the scene at about 7.15 pm on Tuesday evening

Martin McMullan from the MMRT said all 11 group members, aged 16 and 17, were quickly found and treated.

He said they were “all doing well” and the girl who suffered severe hypothermia has now returned home.

Mr McMullan said the teenagers’ quick thinking and help for each other prevented a more serious situation.

“The group had been expeditioning in the Mournes when deteriorating conditions eventually took their toll.

“The team responded and quickly located the group on the Western flank of the Slieve Beg/Commedagh Col.

“All members of the group of eleven were quickly assessed and treated accordingly.

“Initially seven members were guided off the mountains to team vehicles and returned to teachers.

“A further three were assessed and received further treatment on scene before being guided off and reunited with their friends.

“The eleventh member whose condition was the most severe was assessed, treated, packaged and stretchered to team vehicles for transfer to NI Ambulance Service.

“Clearly had it not been for the outstanding efforts of the young people in this group, this situation would have been much much more serious.

“Due to the potential number of casualties involved tonight, we had the pleasure of being joined on the hill by two NIAS HART Paramedics and our Team Doctor.