TERROR IN BRUSSELS: ’13 DEAD’ AFTER EXPLOSIONS AT AIRPORT AND METRO 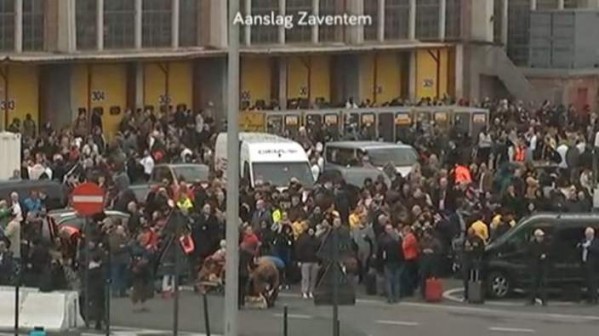 Terror on the streets of Brussels after double bomb attack

Two blasts tore through the departures area of Zaventem airport shortly after 7 am.

An hour later, an explosion hit Maelbeek metro station, close to the EU institutions. The airport and whole transport system have been closed.

Prime Minister David Cameron is chairing a COBRA meeting to discuss security across the UK in the wake of the terror bombings.

The attacks come four days after Salah Abdeslam, the main fugitive in the Paris attacks, was seized in Brussels.

The Belgian government says there have been casualties at the airport but has given no numbers. The cause of the explosions has not been confirmed.

Belgium has now raised its terror threat to its highest level. Prime Minister Charles Michel tweeted: “For the moment, we are asking people to stay where they are.”

Belgian broadcaster VRT said that in addition to the dead at the airport, at least 35 people were severely injured.

The Belga news agency reports that shots were fired and shouts in Arabic were heard before the two explosions. Some reports say it was a suicide attack.

Rail transport to the airport has been halted and people have been told not to come. All flights have been diverted. Eurostar has cancelled all trains to and from Brussels.

Security has been stepped up at Gatwick and Heathrow airports and the UK Foreign Office has advised British nationals to avoid crowded areas in Belgium. UK PM David Cameron will chair a meeting of the Cobra response committeelater on Tuesday morning.

France has stepped up security. President Francois Hollande has held a cabinet meeting to discuss the Belgian explosions. There is also extra security at Dutch airports.