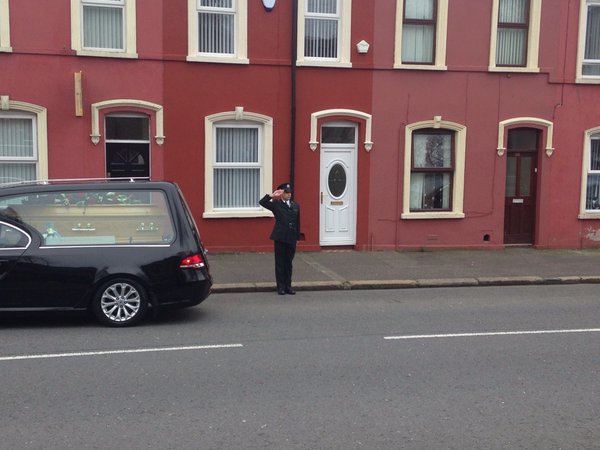 THE murder of prison officer Adrian Ismay was a “dark deed in the darkest of night”, a minister has told mourners at his funeral.

Adrian Ismay was seriously injured after a bomb exploded under his Volkswagen Transporter van as it hit a speed bump in Hillsborough Drive in east Belfast on Friday, March 4.

The 52-year-old was recovering well at home but died in hospital last Tuesday from what police described as a result of deep vein thrombosis.

The New IRA later claimed responsibility for the attack and vowed to target other members of the security forces.

Hundreds of mourners, including colleagues from the NI Prison Service gathered for his funeral today in east Belfast.

Speaking at Mr Ismay’s funeral, President of the Methodist Church in Ireland Brian Anderson, said: “In the darkest part of night – probably dressed in dark clothes, dark men did a dark, dark deed, leading to the loss of Izzy.”

A strict security presence was maintained around the church with nearby roads cordoned off and a police helicopter circling overhead during the service.

“Whether it was the scouts, St. John’s Ambulance or the Community Rescue Service – if he could help, he would.

“He never distinguished people by race, religion or colour. He expected nothing of anyone that he didn’t expect of himself.”

Sue McAllister, the head of the NI Prison Service also attended along with prison officer collegues from across the British Isles.

One man has been remanded in custody charged with the murder of father-of-three Mr Ismay.