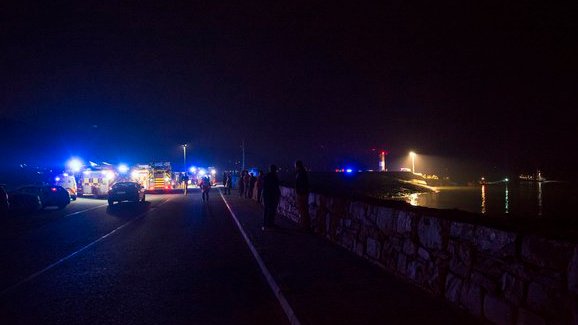 THE family of five who died in last night’s car tragedy in Donegal were from Northern Ireland.

The bodies of a woman in her 50s, who is understood to be from Derry’s Shantallow area, her teenage daughter, the partner of another daughter, originally from the Creggan area, and his two children drowned.

Their remains were recovered from Lough Swilly after their vehicle, an Audi Q7, went into the water off Buncrana pier at around 7.30 pm last night.

It is now believed the car slipped on algae as it turned on the pier and then plunged into the water.

An investigation has now been launched into the tragic accident.

A baby girl, aged two months, was rescued with the assistance of a bystander and is in a stable condition in Letterkenny Hospital.

The mother of the children had been on a “hen weekend” in England at the time of the tragedy.

The bodies were recovered during a major search operation involving the Irish Coast Guard helicopter, the Lough Swilly lifeboat and local fishing boats.

Three ambulances and two rapid response cars were sent from Derry by the Northern Ireland Ambulance Service to assist with the incident.

Gardaí issued a statement last night on the deaths of five Derry people at Buncrana Pier.

They say a baby rescued when an Audi went off the pier is a girl who is in a stable condition in hospital.

The spokesman said five bodies were recovered from the water after the incident at 7.30pm.

“Gardaí, Emercency Services and the Coast Guard attended the scene following reports that a car had entered the water at Buncrana Pier,” said the spokesman.

“A baby girl was rescued from the car, with the assistance of a bystander. The baby is currently in a stable condition at Letterkenny General Hospital.

“At this point it is not propossed to make a Garda spokesperson available. The matter will be reviewed following a case conference tomorrow morning.

“Gardaí are appealing for witnessess and anyone with information is asked to contact Buncrana Garda Station on 074 9320540, The Garda Confidential Line, 1800 666111 or any Garda Station.”

Gardaí are treating this matter as a tragic accident – the car may have accidentally slipped into the water.

Deputy First Minister Martin McGuinness, who is standing in the Foyle constituency in May’s Assembly elections, was shocked at the news.

“My thoughts and prayers are with all of those affected by the devastating tragedy unfolding in Buncrana this evening,” he said.

“Our thoughts and appreciation must also be with the emergency services who have had to deal with this tragic situation.”