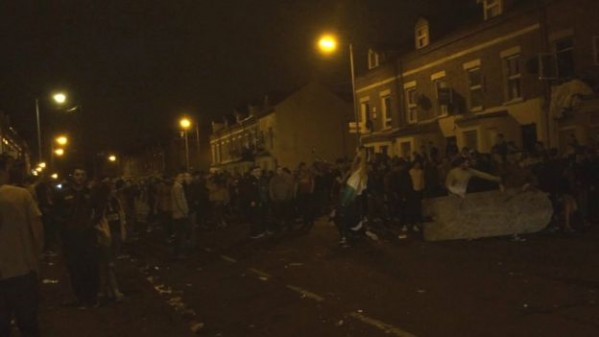 THREE men have been charged over violent disturbances in the Holyland area of south Belfast overnight during which police came under attack from a 300 strong crowd.

One officer was injured when bottles were thrown at police in Agincourt Avenue as a crowd gathered ahead of St Patrick’s Day.

The disturbances lasted for over two hours, ending around 4.30 am this morning.

The 20-year-old was charged with assault on police.

He has also been charged with disorderly behaviour, obstructing police and resisting police.

The teenager faces a charge of riotous behaviour while the 21-year-old is charged with disorderly behaviour.

The three men who were charged have all been released on bail and are due in court in Belfast on April 13.

There was a heavy police presence in the Holyland throughout St Patrick’s Day.

Police fear that as darkness falls trouble may flare again after students had been drinking all day.

The PSNI said they went to the area in the early hours of Thursday after a crowd was reported to be blocking the road and throwing missiles at homes and cars.

Vehicles parked along the street were damaged during the trouble.

One police officer said some people in the crowd had been singing “pro-IRA songs”.

The officer who was injured was hit on the shoulder with a bottle.

Officers were in riot gear and had police dogs.

“Where there are offences, we will be dealing with people who are committing them.

“What young people do could have a life-changing effect for them in terms of their education and their employment.

“We’re dealing with people who are abusing alcohol and then abusing the community within which they live.

“I would strongly encourage people to consider the long term consequences of engaging in any anti-social or criminal behaviour. This could lead to you receiving a fine and a criminal record.”

About twenty staff from Queen’s University and Ulster University are spending the day and night in the Holyland area.

The area has been the scene of disturbances on previous St Patrick’s Days.

In a statement, Queen’s University, Belfast, condemned the trouble.

It said: “Staff from the university and the students union are on the ground in the Holyland area, as they will be tonight.

“While the vast majority of Queen’s students will celebrate St Patrick’s Day in an enjoyable and peaceful manner, Queen’s will fully investigate any complaints or reports of anti-social behaviour.”

The statement said a “strict off-campus disciplinary code” is in place at the university, and that if any Queen’s student is found to have brought the university into disrepute, they will be “subject to the full rigours of this code”.

The university said it has been working with the PSNI, Belfast City Council, Ulster University and Belfast Met since January, and that it supports “robust enforcement of legislation in relation to anti-social behaviour”.

An Ulster University spokeswoman said: “Given the significant amount of work carried out by all partners in advance of St Patrick’s Day, we are disappointed with the behaviour displayed last night.

“The Holyland area of south Belfast attracts a combination of university and college students, non-residents and post-primary students, but, as yet, it is not possible to verify specifically who was responsible for last night’s behaviour.”