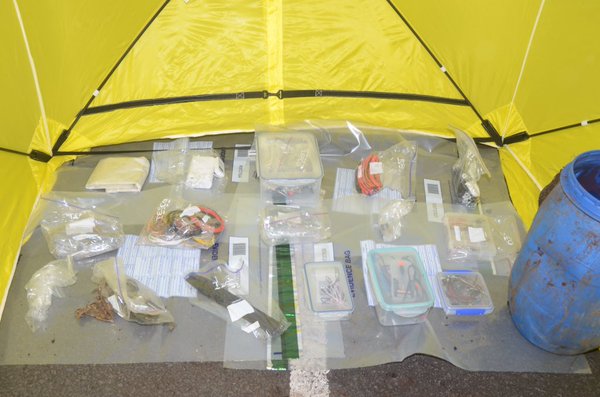 THIS is the deadly dissident republican bomb hide buried underground in a country park at the weekend.

Police said a number of small plastic barrels had been buried in a wooded area in the country park in Ballygally.

They said that inside the barrels “was a significant amount of bomb making components including partially constructed devices and a small quantity of explosives”.

The alarm was raised on Saturday when a dog walker noticed a “suspicious object” in the country park and alerted police.

The find was made a day after the ‘New IRA’ tried to kill a prisoner officer in east Belfast after planting a bomb under his van.

He is under armed police guard in hospital where he suffered serious injuries to his legs.

His condition is now described as stable.

The threat level to prison offices, police and soldiers has been described as at “upper end of severe”.

Police warned staff last Thursday – just 24 hours before the east Belfast attack – that a bomb attack was “imminent” and advised staff to step up their personal security.

Intelligence warned that a new round of under car booby trap bombs were on the loose and advised security force members to check under their cars.