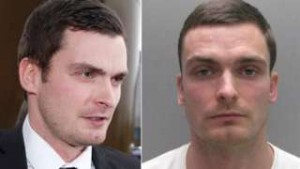 SACKED Sunderland footballer Adam Johnson has been found guilty of one count of sexual activity with a girl aged 15.

The jury at Bradford Crown Court found Johnson guilty of a charge of sexual touching.

But the jury found the 28-year-old not guilty on a charge relating to another sexual act.

The ex-England player had previously pleaded guilty to grooming the girl and one charge of sexual activity.

Judge Jonathan Rose this afternoon warned Johnson that he faces up to five years behind bars for his sex crimes.

The judge said his preliminary view was that the case falls into the category of a five-year prison sentence with a range of four to 10 years.

He added: “The defendant must understand there is a very high probability of a significant custodial sentence.”

Johnson showed no emotion as the jury’s verdicts were delivered.

The father-of-one has been granted continuing bail until his sentencing.

Judge Rose will pass sentence in the next fortnight to three weeks at the same court.

When Johnson first admitted grooming the girl one count of sexual activity with the girl on the morning his trial started, Sunderland FC immediately terminated his contract and sacked him.