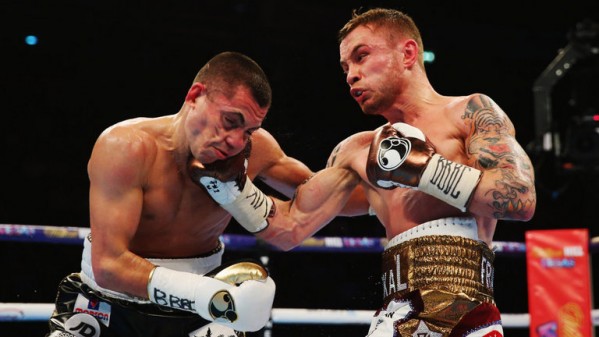 Frampton controlled the early rounds with a disciplined display and added the WBA Super to his IBF belt after receiving two scores of 116-112 from the judges, with the third scoring it 115-113 for Quigg in Manchester.

But debate about who is the best domestic fighter in the division could continue as Quigg felt his late aggression should have earned him the verdict.

Now he wants a rematch against Frampton and if the Tiger’s Bay takes up the challenge that fight could well take place in Belfast.

A simmering feud between the two squabbling camps had threatened to boil over in the build-up and there was even a row about use of the ‘home’ dressing room.

Quigg, just a few miles from his own front door, received a harsh welcome from the travelling Irish fans and then Frampton was roared to the ring by his vociferous support.

After years of anticipation, the two fighters shared a ring at last, and tension was etched on their faces in the tentative opening minutes, with Quigg landing a short counter left hook.

Frampton tried to set the tone with his stabbing jab in the second round and Quigg was inches away from landing a looping hook in the closing seconds.

With the ‘Jackal’ content to edge forward behind his jab, Quigg cleverly countered with his hook in the third.

But Frampton was dictating the cagey early stages with occasional bursts of punches, although Quigg answered with a crisp right hand in the fourth.

Watching from the corner, trainer Joe Gallagher offered stern advice to Quigg after Frampton appeared to pocket the fifth with that accurate jab.

A jolting uppercut briefly stopped the Bury man in his tracks during the sixth, but Quigg was marching forward with more purpose and tried to bully his opponent to the ropes in the seventh.

Quigg was finally knocking Frampton out of his confident stride, ripping a hook through his defences in the eighth and he unloaded more clubbing punches on the Northern Irishman in the ninth.

Sensing the closeness of the cards, both stood and traded in the 10th, and the crowd roared in approval as Quigg and Frampton exchanged spiteful punches from close quarters.

Quigg was welcoming this damaging dogfight and unravelled Frampton’s defences with a big overhand right before ramming more punches on his dazed foe in the 11th.

Into the last, Frampton stepped neatly away from danger and countered with a cluster of punches as Quigg charged forward in search of a telling blow.