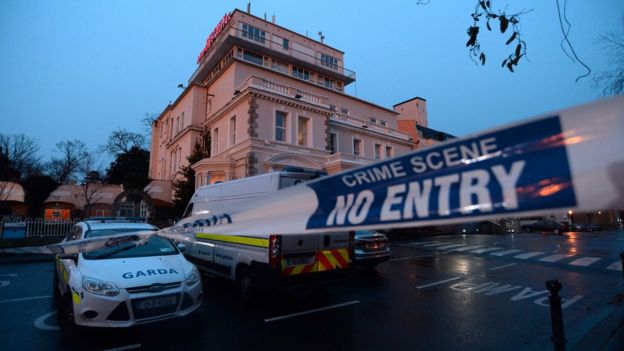 THE Continuity IRA have claimed they carried out a shooting in Dublin on Friday in which a drug dealer was killed and two associates injured.

In a chilling statement, CIRA claimed it was revenge for the murder of dissident republican Real IRA boss Alan Ryan.

And the shadowy terror group said it also plans to carry out further attacks “on drug dealers and criminals”.

The claim has added to the confusion as to who carried out the assassination with Gardai believing some of the six gunmen involved were from outside the Republic and even the UK.

Garda detectives said they were “keeping an open mind in relation to the criminal groups involved”.

Detectives at first was believed the gun attack was part of a feud between two major rival drug gangs in Dublin.

Three of the gunmen wore police-style SWAT team uniforms and were armed with AK47 assault rifles.

The police also said at least six people were involved in the attack at a weigh-in for a boxing match between Dubliner Jamie Kavanagh and Portuguese boxer Antonio Joao Bento.

The man who died was well known drug dealer David Byrne, 33, from Raleigh Square in Crumlin in the south of the city.

In a statement today to the BBC, a man claiming to speak on behalf of the leadership of the Continuity IRA said its members were responsible.

The caller claimed Mr Byrne was targeted because he had been involved in the kjlling of Alan Ryan in Dublin four years ago.

Ryan, 32, was a leading member of another dissident republican group, the Real IRA. He was shot dead in September 2012.

At the time it was reported that Ryan’s faction within the Real IRA in Dublin had been engaged in a feud with major gangland criminals.

“Although not a member of our organisation, we are not going to stand back and allow drug dealers and criminals to target republicans,” the CIRA spokesman said.

He also warned that further attacks were planned.

“This will not be an isolated incident,” he said.

“Continuity IRA units have been authorised to carry out further operations. More drug dealers and criminals will be targeted.

“The Continuity IRA will carry out further military operations.”

In the wake of Friday’s attack, Gardai set up armed checkpoints in Dublin because of fears of retaliation.

Speaking on Monday after the attack, Sinn Fein president Gerry Adams said: “It was a brazen attack in broad daylight by criminal thugs who believe they can operate with impunity and above the normal rule of law.

“They should be locked up, where they belong.”

Mr Adams added: “I understand a group calling itself the Continuity IRA has claimed responsibility for the attack at the Regency Hotel.

“They are not the IRA. The IRA are gone and their weapons are gone,” he said.