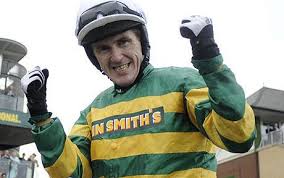 RACING legend AP ‘Tony’ McCoy is to receive a knighthood for his services to horse racing.

The 41-year-old retired jockey became the most successful rider of all time over a 23 year career.

The Co Antrim man has under his belt 31 Cheltenham Festival winners, two Gold Cups and one famous Grand National success.

And he was also crowned champion jockey for 20 consecutive seasons.

He picked up another significant prize at this year’s Sports Personality of the Year ceremony in Belfast when he was handed the Lifetime Achievement award.

He is only the second jockey in history to have been awarded a knighthood, with Richards the first in 1953.

Said McCoy: “They came around to the conclusion that Sir Anthony sounded the best.

“It’s only my close friends who I’m going to make call me Sir Anthony. I think everybody else can call me Tony or AP or whatever they like.”

Carl Frampton has been awarded an MBE in the New Year Honours list for services to boxing.

The 28-year-old from North Belfast is the reigning IBF super-bantamweight champion and is set to fight WBA belt-holder Scott Quigg in a unification bout in Manchester on February 27 next year.

The Jackal made his professional debut in 2009 and is yet to be beaten in 21 fights, winning 14 of them by knockout.

Frampton was made to work hard in his most recent title defence, suffering two first-round knockdowns against Alejandro Gonzalez in El Paso in July before going on to win the fight on points.

Jimmy Nesbitt has said receiving an OBE will “give credence” to the cause of those left searching for loved ones following the Troubles in Northern Ireland.

He has received the honour for services to Northern Ireland through the Wave Trauma charity and to acting.