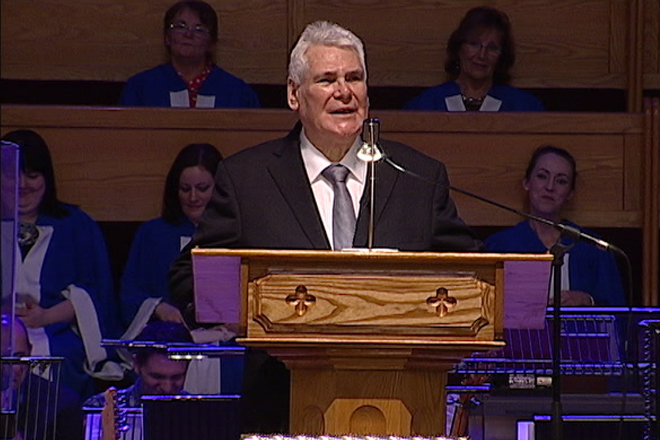 THE district hudge in the trial of evangelical preacher Pastor James McConnell accused of making “grossly offensive” remarks about Islam will deliver his verdict next month.

Pastor James McConnell, 78, denies two charges relating to a sermon he gave in his Metropolitan Tabernacle Church last year during which he branded the faith of Muslims as ‘Satanic Islam’.

Judge Liam McNally said he wanted 20 days to deliver his verdict, wishing everyone in court a happy Christmas saying he will see the defendant, prosecution and defence lawyers early in the New Year on January 5 when he will deliver his anticipated judgement.

Earlier in the hearing at Belfast Magistrates’ Court, an application by defence QC Philip Mateer to have the case against the pastor thrown out was rejected by the judge.

Summing up the prosecution’s case, a barrister said Pastor McConnell, of Shore Road, Newtownabbey, was “not on trial for his beliefs”, but for what he said and using words that were allegedly grossly offensive.

“He intended to use those words, it wasn’t a slip of the tongue,” he told Belfast Magistrates Court.

However, Mr Mateer QC called on the court to find Pastor McConnell not guilty.

He said he was a man with an unblemished record who should be recognised for his good works in society, not convicted in court.

During his own evidence, Pastor McConnell, who stepped from his church following the row, told the court that he still believed in what he had preached, and did not go into church to “provoke anyone”.

He said he only realised he may have offended anyone when he got a call from BBC Radio Ulster’s Nolan Show.

“I was attacking the theology of Islam. I was not attacking any individual Muslim,” he told the court.

“I didn’t realise that good Muslim people would be hurt.

“I didn’t go into the church to provoke anyone. I went into church to present the truth.”

Asked why he refused an informal warning that would have prevented a criminal trial he said: “If I took it, that would be an insult to the one I love … that was me gagged for the rest of my life.”