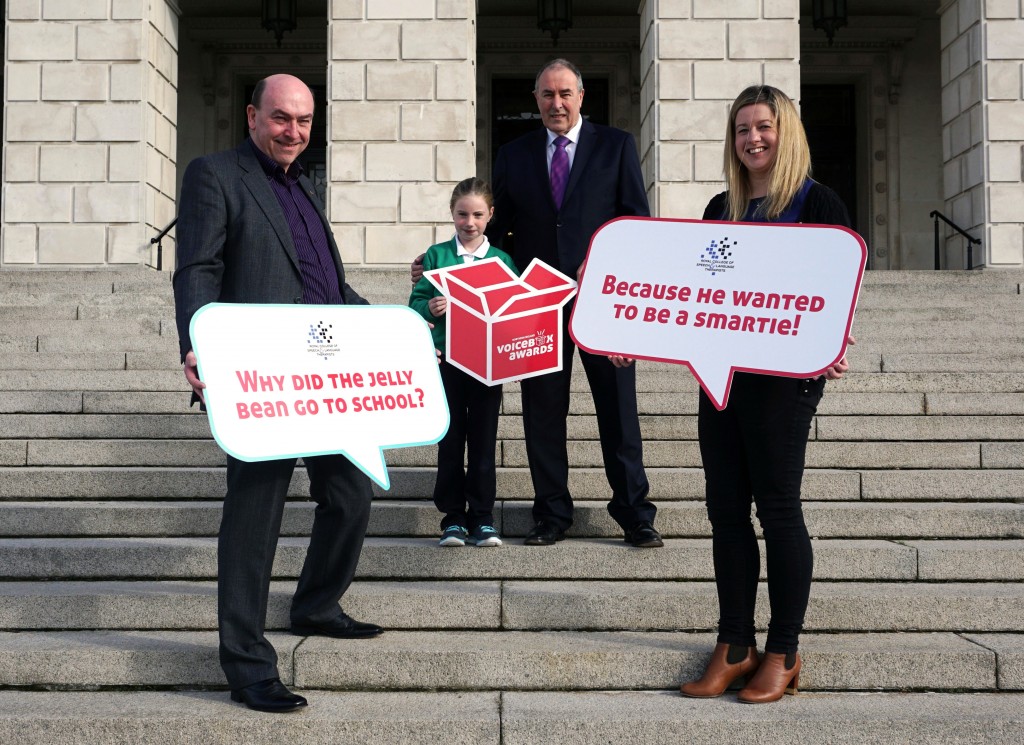 Entries are now open for the Royal College of Speech and Language Therapists (RCSLT) ‘2016 Voice Box Awards’ schools joke-telling contest which returns to Parliament Buildings on 7 March next year.

Twenty of the funniest jokes will be selected for the live grand final where one lucky winner will take the title of 2016 Voice Box Champion and will win an iPad 2.

Launching the competition, Speaker McLaughlin said: “I am personally very pleased that this event is taking place for the fourth time in Parliament Buildings.

“Since taking on the role of Speaker I have been acutely aware of the fundamental role that communication plays in all aspects of this Assembly.

“This event offers a valuable platform to raise awareness of the way language and communication skills can aid educational attainment.

“Just as important, it gives school children an opportunity to practice these skills in a fun and exciting competition.

“I know from the Assembly Chamber that some of the best speeches use humour to make their point.

“It is particularly important that we encourage all school children to enter, including those with speech and language difficulties, as the competition will build their confidence and give them an opportunity to use their communication skills in public.”

Vivienne Fitzroy, RCLST Northern Ireland Policy Officer said: “This popular event has been a great success in previous years, with fantastic engagement between pupils and their elected representatives.

“This time we are providing schools with an online toolkit where they can find the resources they need to run their own Voice Box heat.

“The toolkit contains everything from posters to put up around the school and certificates for pupils participating in their own competition.

“Through the RCSLT Giving Voice campaign politicians, parents/guardians and speech and language therapists are working closely to raise awareness of the importance of communication.”

Save the Children CEO Fergus Cooper said: “Having seen the jokes from previous years I can see that the bar has been set fairly high.

“This event aligns closely to our own Read On. Get On. campaign to get every child reading well at age 11.

“Achieving the goal will not be possible without improvements in early language development.”

Fergus will be joined on the judging panel by the BBC’s Tara Mills with Eamon Mallie as compere.

Applications must be in by 15 February 2016 and the 20 funniest pupils will have the chance to deliver their joke in front of a live audience in Parliament Buildings on 7 March 2016.

The application form is available online at www.givingvoiceuk.org/voicebox-NI or by contacting RCSLT directly by email Janet.mcgookin@rcslt.org or by calling 02890 446 385. For further information about Giving Voice go to http://givingvoiceuk.org