PSNI: TELL US THE MOVEMENTS OF STOLEN CAR USED IN ‘HEINOUS’ MURDER BID ON POLICE OFFICERS 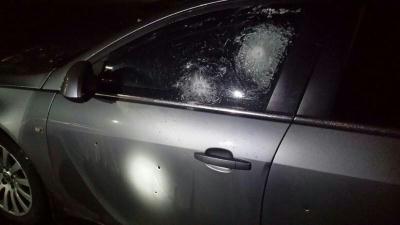 DETECTIVE investigating the attempted murder of police in west Belfast this week are making a specific appeal for help in tracking the movements of the car used by the would-be killers.

Two police officers escaped injury when a gunman opened fire on their police vehicle in Rossnareen Avenue at around 6.50pm on Thursday, November 26.

The vehicle was struck eight time by heavy military gunfire, possibly from an AK47 assault rifle.

“We believe the gunman travelled to and from the scene in a black BMW 3 Series bearing the false number plate 05 C 24774. This vehicle was later found on fire in Cluain Mor Drive.

“We now know that this car had been reported stolen from an address in Ashbourne in county Meath on 7th September 2015. The genuine registration of this vehicle is 05 LH 5364.

“It is critical to our investigation that we gather as much information as possible about the movements of the BMW between the time it was stolen and it being used in Thursday’s gun attack.

“I am appealing to residents on both sides of the border – did you see this vehicle at any time after September 7th?

“Can you help us trace the movements of the vehicle either in the Republic of Ireland or as it made its way north across the border and into Northern Ireland?

“Do you know have any information to assist this investigation? Any detail, no matter how small, could be important.

“We have established that the owner of the stolen vehicle and the individual whose car registration was duplicated on the false plates are both entirely innocent of any involvement in this heinous act and they have been excluded from our enquiries.

“Anyone with information about the movements of the car can contact the PSNI from Northern Ireland by calling 101, or from the Republic of Ireland by calling 048 9065222 and asking for Major Investigation Team detectives at Ladas Drive.

“We are working closely with our colleagues in An Garda Síochána and callers in the Republic of Ireland can also give information to officers at Ashbourne Garda Station, Garda District HQ, County Meath on 01 801 0600 or via the Garda confidential number 1-800-666-111.”