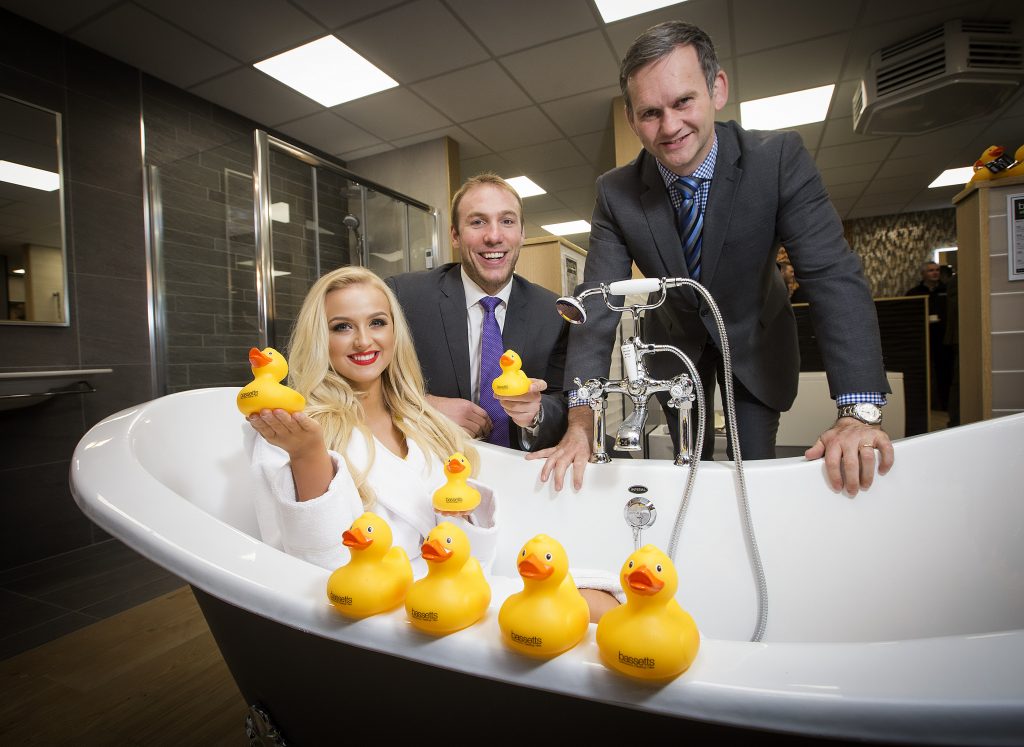 Stephen Ferris and Miss Northern Ireland were among the guests who celebrated the opening of Bassetts’ new ‘Simply Bathrooms’ showroom and the growth for the company, which continues to buck the trend in the sector as a national DIY chain closes in the area.

BASSETTTS, Northern Ireland’s largest bathroom, heating and tile company has opened the doors to its 14th store in Northern Ireland in the heart of Boucher Road retail village, Belfast.

It also has showroom expansions in two of its local branches in Co Derry following a period of significant growth for the company.

The locally-founded company marked this growth milestone with a special event at its new flagship Belfast store, which uniquely includes Bassetts’ Visualiser technology, the first in NI to offer customers a virtual tool to design their own bathroom.

Stephen Ferris and Miss Northern Ireland were among the guests who celebrated the opening of Bassetts’ new ‘Simply Bathrooms’ showroom and the growth for the company, which continues to buck the trend in the sector as a national DIY chain closes in the area.

In addition, expansions to the North West branches include new showrooms opening at both locations, with Bassetts Coleraine doubling in size and the Derry-Londonderry branch launching the company’s first ever tile studio.

Locally-founded in 1982, the company, which is now part of the internationally renowned Saint-Gobain Group, has strengthened its operations significantly, almost tripling in size over the last seven years.

The growth has been fuelled by recent positive movements in the local home improvement and housing market in Northern Ireland, with Bassetts maintaining a strong position; as it did during the challenging recession period.

Managing Director of Bassetts, Alan Wright, commented, “We are delighted to launch our new Boucher Road branch this week, alongside extensive branch expansions in Derry and Coleraine.

“Despite the difficulties that many national retailers may be facing in the home improvement market, our bathroom, plumbing and heating business has gone from strength to strength.

“In recent months, we have seen an increasing number of homeowners choosing to renovate or improve their homes, with 44% of homeowners fitting a new bathroom in the last three years.”

“A further half of all homeowners in Northern Ireland are also predicted to renovate their homes this year and that is a key reason why we have expanded our showrooms and opened a new Belfast store to meet an increasing demand for exclusive, high quality, affordable products.”

“The number of new homes being built across Northern Ireland is also up by almost 50% and we are committed to offering our trade customers an expanded range of options and to plug the gap in offering stylish and affordable heating and plumbing solutions for new builds.”

Bassetts is all encompassing and caters for every bathroom, plumbing and heating need, ranging from bathrooms, showers and tiles through to radiators and boilers. Its extensive branch network provides residential and trade customers with bathroom solutions from the leading local and international manufacturers.

For further information, visitwww.bassettsonline.com or telephone head office on 028 3833 94 38.