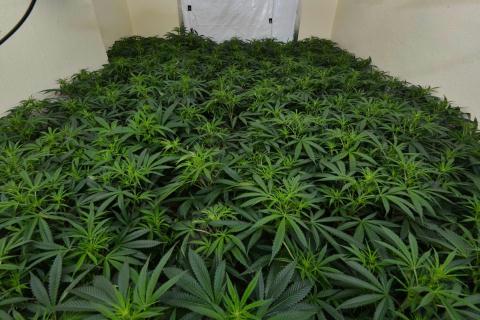 DETECTIVES from the PSNI’s Reactive and Organised Crime Branch have arrested a 47-year-old male in connection with the discovery of a number of cannabis factories in 2014 when cannabis and herbal cannabis with a total estimated street value of more than £1.6 million was recovered.

The 47-year-old was detained in London last night, Tuesday 17th November, and has been returned to Northern Ireland for questioning at the PACE custody suite in Musgrave PSNI Station in Belfast.

“The 47-year-old, has also been arrested in connection with the discovery of a cannabis factory in the Church Street area of Portadown on 15th October, 2014, during which cannabis with an estimated street value of more than £750,000 was seized.

“He is currently helping police with their enquiries.”

Two men aged 21 and 36, have already been charged in connection to the discovery of the cannabis factory in the Church Street area of Portadown.

Both men appeared at Craigavon Magistrates Court on October 17, 2014.