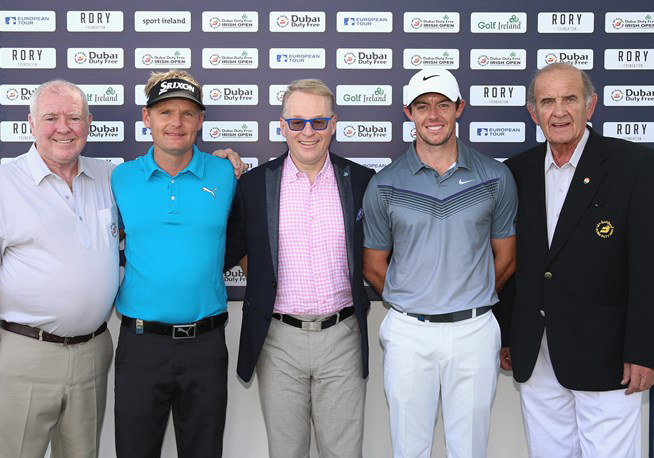 RORY McIlroy launched ticket sales for the 2016 Dubai Duty Free Irish Open and urged the Irish public to snap up their tickets for next year’s event at The K Club to help raise funds for the Rory Foundation.

A percentage of each ticket sold for the Dubai Duty Free Irish Open at The K Club from May 19-22 will go directly to the Rory Foundation, which was established by McIlroy in 2013.

The purpose of the Foundation is to help children live better lives by raising funds and offering support to children’s charities around the world.

The Dubai Duty Free Irish Open Hosted by the Rory Foundation, which will be supported by the Irish Government under the auspices of the National Tourist Board – Failte Ireland and the Irish Sports Council – Sport Ireland, will see The K Club host Ireland’s national Open for the first time, while The European Tour will make a welcome return to the Kildare venue, which played host to Europe’s record-equalling 18 ½ – 9 ½ Ryder Cup victory of 2006, and between 1995 and 2007 staged 13 editions of the European Open.

“The more tickets we sell for the Dubai Duty Free Irish Open, the more money we will raise for the Foundation – it’s really as simple as that,” said McIlroy, who is seeking to claim a third Race to Dubai title at this week’s DP World Tour Championship in Dubai.

“It would be fantastic to see people really getting behind the tournament and buying their tickets early. I started the Foundation in 2013 and began giving my support to a number of children’s charities. In that time I’ve met a lot of children and their families living and coping with so much hardship that I’m just so delighted to be involved – and the more I see, the more I want to do.

“Every little bit does help when it comes to fundraising, so I hope people can buy tickets and support both the Foundation and the Irish Open.

“We’re back at K Club 10 years after the Ryder Cup came to Ireland in 2006. There’s also a great prize fund of €4 million to play for and some of golf’s most exciting players will be on show for people to get out and follow. It promises to be a really fantastic event.”

Tickets for the 2016 Dubai Duty Free Irish Open start at €30 for daily tickets (€20 concessions) with season tickets currently available at €70 (€50 concessions). Children under the age of 16 accompanied by an adult gain free admission. Tickets are now available at: www.dubaidutyfreeirishopen.com and http://tickets.europeantour.com.

Colm McLoughlin, Executive Vice Chairman of Dubai Duty Free, said: “I think that this is a great initiative on the part of Rory and the Rory Foundation to raise funds through the ticket sales for the Dubai Duty Free Irish Open.

“What Rory and his foundation are doing really resonates with us and the work that our own foundation carries out around the world.

“Ahead of this year’s tournament in Co. Down, we visited the Daisy Lodge facility and we saw first-hand the great work that Rory and his Foundation team are doing to help children and their families who are affected by cancer.

“Rory is a remarkable young man and his work both on and off the golf course continues to be an inspiration to so many people. Next year’s tournament at The K Club is going to be fantastic and I am sure that the ticket sales will do extremely well.”

Keith Pelley, Chief Executive of The European Tour, said: “The work of the Rory Foundation, and the charities it supports, is truly remarkable so we are delighted to be working with Rory and his team to raise as much money as we can through our Dubai Duty Free Irish Open ticket sales.

“We are hoping for a win-win effect with this initiative: we hope to sell as many tickets as possible to guarantee that amazing Irish atmosphere at one of our biggest and best events next year, while at the same time raising as much money as possible for the Foundation so they can continue their outstanding work with the people who need our help, care and support the most.”

In 2013, the Rory Foundation committed £1 million to the Cancer Fund for Children, helping the registered charity to build the Cancer Fund for Children’s Short Break Centre. Named Daisy Lodge, the Centre, officially opened by Rory in October 2014, is the first of its kind in the UK and Ireland and provides welcome breaks for as many as 500 families a year living with cancer.

The Rory Foundation also pledged £250,000 to Mencap NI in 2015, which has gone towards a new facility in Belfast, due to open early next year, which will provide life-changing support to children with a learning disability and their families.

A further donation of up to £250,000 in match funding has also been pledged by the Rory Foundation in 2016 – if the same amount can be raised by Mencap NI and its supporters by the end of this year.