WELCOME TO MAGHABERRY JAIL: THE MOST DANGEROUS PRISON IN THE UK 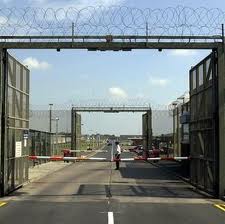 A DAMNING report says the top security Maghaberry jail is the “most dangerous” prison in the United Kingdom.

Inspectors who visited the top security jail six months ago said it is also “unsafe and unstable” for prisoners and staff.

Acccording to a report published today, inspectors found the Co Antrim prison a “state of crisis” during a visit in May this year.

The joint report, was compiled by Her Majesty’s Chief Inspectorate of Prisons in England and Wales and Criminal Justice NI.

It is one of the most critical of any prison in the UK.

It said there were significant failures in leadership.

The report was published jointly by Brendan McGuigan, chief inspector of Criminal Justice NI, and Nick Hardwick, Her Majesty’s Chief Inspectorate of Prisons in England and Wales.

Mr Hardwick said the prison was the “most dangerous prison” he had ever been in.

He described it as a “very worrying and disturbing public institution” and said Charles Dickens could write about Maghaberry “without batting an eyelid”.

In a hard-hitting conclusion the pair warned: “What we found was a highly complex prison that was in crisis and it is our view that the leadership of the prison had failed to ensure it was both safe and stable.

“We had real concerns that if the issues identified in this report – which were brought to the attention of the prison leadership at a frank feedback session at the end of the inspection – were not addressed as a matter of urgency, serious disorder or loss of life could occur.”

The Chief Inspectors said they are also worried that a deliberate fire at Maghaberry’s Erne House which had the potential to cause death or serious injury, had occurred in April, just weeks prior to the inspection.

As a result the Chief Inspectors have recommended “urgent action be taken to strengthen leadership” and called for the circumstances and response to the fire to be subject to an independent review.

Highlighting some of the key findings of the inspection, the Chief Inspectors said more prisoners than before had reported “feeling unsafe”. It added: “Illegal and prescription drugs were also more widely available than in March 2012 when Maghaberry Prison was last inspected”.

The report added that staff absence was high which led to “frequent and unpredictable disruption to the daily regime for many prisoner” and that this has a “negative impact on relationships between prisoners and staff”.

Inspectors found substantial numbers of prisoners were spending long periods of time locked up in their cells, limiting access to education, showers, opportunities to make telephone calls to family and friends and carry out everyday domestic tasks. The report stated that this situation was “frustrating for prisoners and contributed to the overall instability of the prison”.

Levels of assaults and rates of self-harm at Maghaberry Prison had increased and Inspectors say they were told a “great deal of bullying and incidents of physical violence were going unreported”.

Staff morale within the prison was described as low at the time of the inspection with some staff members subject to credible threats.

Mr McGuigan added: “The risk and impact of threats and acts of intimidation cannot be seen in isolation from the challenges faced by the leadership and staff of the Prison Service in managing the separated units, which consumes a disproportionate amount of management attention.

“Giving preference to maintaining the regime for separated prisoners over every other area in the prison is unfair and has a negative impact on more than 900 men who make up the majority of the prison population.

“This position is untenable and a radical new approach is now required. To assist with this process we recommend that should it remain necessary to manage the separated units in this way, their location, management, and resources should be treated as stand alone to that of the main prison.”

The Chief Inspectors also highlighted their concern around health care provision within Maghaberry which was impinging on the prison’s ability to function effectively.

They said: “Inspectors were very concerned that aspects of health care provision had deteriorated since the previous inspection. In our view it was falling short and not meeting the complex needs of the prison population.

“There were insufficient numbers of primary care nurses and problems in retaining staff. Some areas of health care including chronic disease management and substance misuse, were considered by Inspectors to be unsafe.

“Delays and serious problems with the way in which medications were administered, particularly the practice of prisoners holding their own prescribed drugs created a risk of medicines being diverted and vulnerable prisoners bullied.

“We have therefore recommended that health care services are urgently improved to ensure patient safety and requested that an action plan to address the concerns identified in this report be developed within one month by the South Eastern Health and Social Care Trust in partnership with the Prison Service.”

Mr Hardwick said the inspection was “concerning” and “as bad as any we have seen in recent years”.

He added: “When Maghaberry was assessed against the renowned ‘healthy prison’ standards, performance was found to have fallen from ‘not sufficiently good’ to ‘poor’ in relation to safety, respect and purposeful activity.

“Only in relation to resettlement had the standard of ‘reasonably good’ been maintained. In addition only 16 of the 93 recommendations made in 2012 had been achieved.”