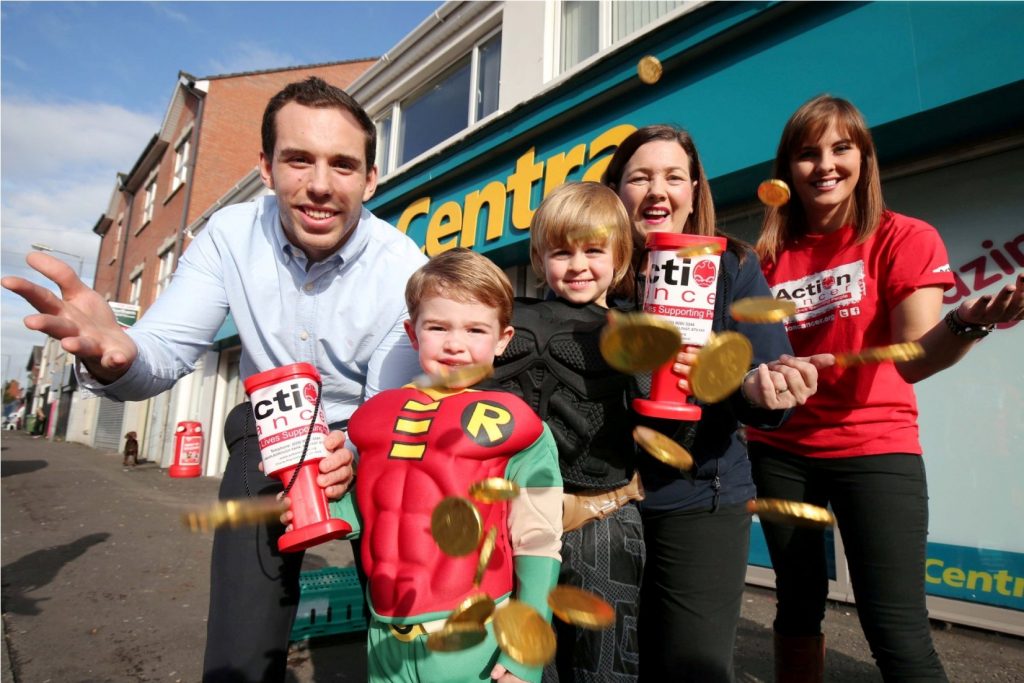 Centra Superheroes…Centra stores throughout Northern Ireland are encouraging customers this Halloween to support their fundraising challenge as they attempt to raise a cosmic £80,000 for Action Cancer. Picture by Darren Kidd / Press Eye.

BE a superhero this Halloween! That is the call from independent retail group Centra who is asking customers to help raise a cosmic £80,000 for Action Cancer.

Seventy-three Centra stores across Northern Ireland will get into the spirit of the fundraising challenge, from October 26-31, with a host of exciting in-store activities for staff and customers to enjoy.

The funds raised will help support Action Cancer’s own heroes, Mambo and Jazz in their quest to improve kid’s health and fitness levels, through the Health Action health programme.

Sponsored by Centra and its independent retailers across Northern Ireland since 2003, the Health Action programme, which has recently revealed a fresh new-look, educates young people on healthier lifestyles through play, games and team based physical activities.

Action Cancer’s Health Action team have worked with more than 1,000 nurseries, schools and colleges, reaching over 500,000 children across Northern Ireland and has received over £1 million of fundraising by Centra stores and Musgrave NI staff.

Customers can also make the most of some spook-tacular offers and stock up on their trick-or-treat confectionary while making that all important donation.

Nikki McDowell, Centra Brand Manager said: “Halloween is always an exciting time of year for Centra and a great opportunity for our retailers, staff and customers to join together and raise much needed funds for Action Cancer.

“Everyone who gets involved and donates is a true Superhero, as their support helps to educate children across Northern Ireland about their health and well being,” she added.

For more details on Centra go to www.centra.co.uk or visit www.facebook.co.uk/CentraNI by October 23for your chance to win an all access pass for eight people to Fright Night at The Jungle NI, Monster Ball Tickets and overnight stay in a glamping pod.