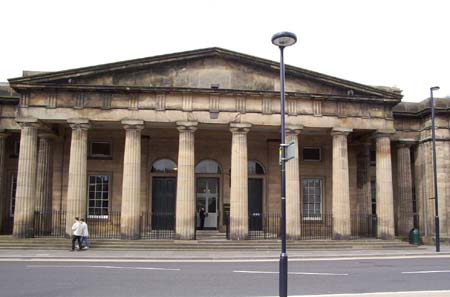 A Celtic supporter has been banned from attending all football matches for six months for chanting a sectarian song with his pals at a Scottish league game.

A court has heard that Lewis Connor was a known figure in a group of Hoop fans called the ‘Style Mile Vandals’.

The court heard the group of 25 fans threw flares and smoke bombs and hit a police car with cans while their team was playing St Johnstone in the Scottish Premier Football LeagueL which was broadcast live on BT Sport in May this year.

The 18-year-old, of Atholl Crescent in Paisley, admitted singing about “Orange b******s” at St Johnstone’s McDiarmid Park ground in Perth, on May 15 this year.

Perth Sheriff Court was told that camera-toting policemen along with a Celtic ‘spotter’ observed 25 members of the ‘Style Mile Vandals’ alighting from a supporters’ bus in the car park.

A  proseuctor told the court: “They stood together in the North Stand. Just after kick-off a flare and two thunder-flashes were set off from among the group, but the person responsible was not identified.

“At 8.15pm one of the group was ejected for unruly behaviour. The remainder of the group left the stadium, setting off a smoke bomb and a further flare as they left. It was captured by the BT cameras.

“Cans were thrown towards a stationary police vehicle. Police left to monitor the group. The accused was a prominent member of the group.

“He was singing along with songs. He was identified by the spotter officer who had previous dealings with him. They were singing the Green Flag Flying High which had the line ‘you’ll never be mastered by Orange b*****s’.

“He was clearly observed singing ‘Orange b*****s’. That is a sectarian reference, clearly perceived to be directed at Rangers fans.

“The group were also heard to take part in pro-IRA songs.”

His solicitor said it was a “moment of madness” on the part of Connor, adding that the Style Mile Vandals had now disbanded.

Banning him for six months, Sheriff William Wood said: “This will be a hard lesson for you.”