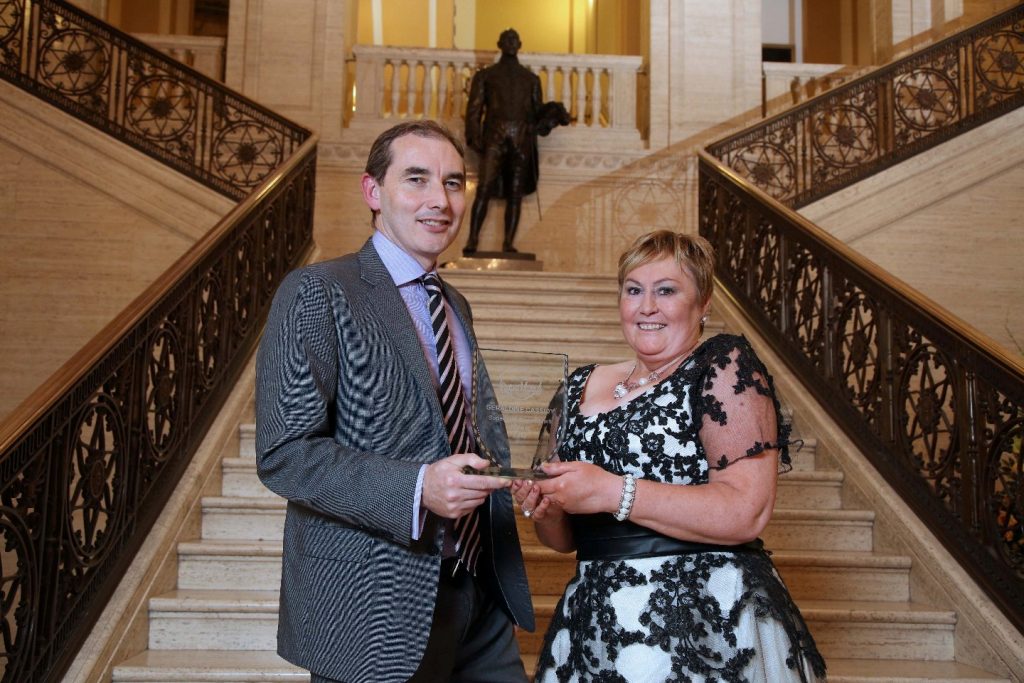 SuperValu SuperMum…Geraldine Cassidy from Belfast, has been crowned the 2015 SuperValu SuperMum during a prestigious ceremony at Parliament Buildings, Stormont. Geraldine, pictured along with Musgrave NIÕs Managing Director, Michael McCormack, was honoured for dedicating 15 years of her life to foster care, opening her home to almost 80 children. PIC: DARREN KIDD/PRESSEYE

Thirty-six mums from across Northern Ireland were honoured at the SuperValu SuperMums ceremony which saw Co. Down’s Siobhan Rice announced as a runner-up alongside Co. Tyrone’s Claire O’Hanlon.

Dairyfarm SuperMum Geraldine was crowned the winner by a judging panel for dedicating much of her life to the care of children.

Over a period of 15 years, Geraldine as a foster carer, opened her home to almost 80 children, from new born babies to pre-teens, who required urgent short-term care.

Hundreds of nominations were received for the competition sponsored by Magnum, Kellogg’s and Robinsons, from inspiring mothers and 36 finalists were chosen from SuperValu stores across Northern Ireland.

Speaking of her win, Geraldine said: “I really can’t believe I have won, I didn’t realise my daughter Fiona had even nominated me. To be told I am the SuperValu SuperMum for 2015 has left me totally speechless, especially as I was nominated amongst so many wonderful mums.

“I just love children and enjoyed every second of being a foster carer, it was heart-breaking at times having to let the children move on but my children and husband were a great support throughout this time,” she added.

Donna Morrison, Marketing Manager of SuperValu, said:  “Congratulations to Geraldine on being crowned SuperValu SuperMum 2015! This year we were overwhelmed with wonderful mums and their selflessness and Geraldine truly is a SuperMum, not only raising three children of her own but caring for so many children who needed support.

“There are so many inspirational mothers across Northern Ireland who show such humility when dealing with life’s challenges. I would like to congratulate all 36 of our SuperMum finalists as they are all very deserving,” Donna added.