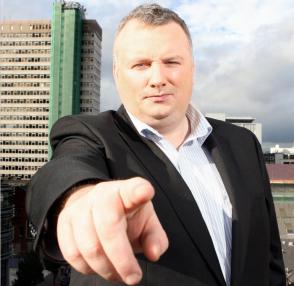 BBC ‘shock jock; Stephen Nolan is to be called as a witness at the the trial of outspoken preacher Pastor James McConnell who is accused of making grossly offensive remarks about Islam.

Pastor McConnell faces charges relating to a sermon he gave in his north Belfast church last year in which he called the religion “satanic” and “heathen”.

He will stand trial for three days starting on December 14 at Belfast Magistrates’ Court.

One of the witnesses called to give evidence could be the BBC Northern Ireland presenter Stephen Nolan.

His remarks about Islam were made at the Whitewell Metropolitan Tabernacle in north Belfast in May 2014 and were streamed online.

A huge throng of supporters arrived with the 78-year-old for his hearing this morning at the Laganside Complex.

Defence solicitor Joe Rice had asked Stephen Nolan to attend the hearing after he had interviewed Pastor McConnell for both is radio and TV shows.

But north Belfast presenter referred the request to the BBC’s legal department. It prompted Mr Rice to refer to Mr Nolan as the ‘biggest no-show in the country’.

The BBC has questioned what relevance Mr Nolan has to the case.

The court is considering issuing a witness summons before the trial begins.

A judge gave the defence team seven days to produce a written application outlining what evidence they believe Mr Nolan could provide.

Pastor McConnell’s legal team are also considering lodging an abuse of process application to have the case thrown out..

Criticising the Public Prosecution Service (PPS), he said his first “substantive” communication with prosecutors in a month was 45 minutes before Thursday’s hearing was due to begin.

“The prosecution have adopted the tactic of the silo. We have been kept in the dark,” he said.

However, a prosecutor told the court there not been any undue delays in the case and the decision to proceed was made following a rigorous investigation which included lengthy consultations.

Pastor McConnell told hundreds of his supporters outside court: “As far as I am concerned the Muslim issue is over.”

“I hope I get my Christmas dinner. I will be there on December 14, 15 and 16. I am not running away, definitely not. I am going to take my stand for the Lord.”

He added that he was prepared to go to prison for his religious views,