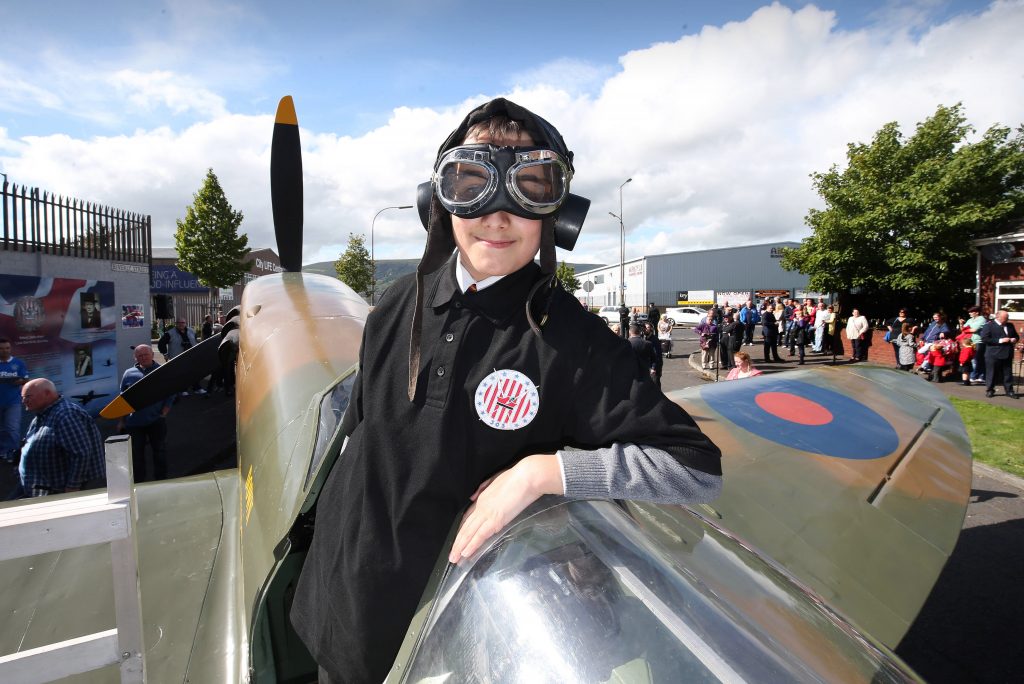 Pictured at the unveiling of the Band of Brothers mural is Alex Snowarski, aged 12, who was involved in a series of workshops as part of the project this week.Photographer ©Matt Mackey – Presseye.com

ICONIC immortalising the efforts of Polish airmen during World War II was unveiled on the International Wall in Belfast this afternoon, marking the 75th anniversary of the Battle of Britain.

The mural, the work of Belfast artist Ross Wilson, forms part of the ‘Band of Brothers’ anti-racism project, devised by RAF historian Pete Bleakley and funded by the Housing Executive.

The spirit of the 1940s was captured at the Lower Shankill launch when a replica Spitfire, provided by the Ulster Aviation Society, was rolled into Beverley Street. Residents and visitors joined in by wearing attire from that era.

The Band of Brothers project aims to capture the public’s attention to remind them of the valiant exploits of Polish 303 Squadron, later stationed in Northern Ireland.

Young people from the Shankill and Polish communities across the city came together this week to take part in a series of workshops. The project will also see an anti-racism tool kit produced and distributed to local communities to help tell the story of the Polish community’s contribution to our society.

“I’ve had a lifelong interest in RAF history. I learned that 303 and other Polish and Czech squadrons had an absolutely pivotal role in the Battle of Britain. It occurred to me that events of 75 years ago in the skies over Kent could help positively shape events on the ground in Belfast in 2015.

“The Battle Of Britain, and our freedom as a nation, was won in no small way by the bravery of those Polish pilots, whose wartime motto was, ‘Love Demands Sacrifice.’ They fought ferociously for their freedom and ours. The Poles were part of us then and they are part of us now.” 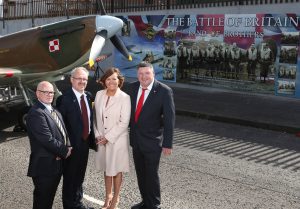 “Poland and Northern Ireland are inextricably linked.  During WW2 we had brave Polish airmen stationed here making a vital contribution to the Battle of Britain which is being commemorated.

“Our shared history continues as many from Poland choose to make Northern Ireland their home.  I commend the efforts made by everyone involved in creating this mural as it’s an important reflection of the diverse and integrated community which Northern Ireland is developing.

Lower Shankill Community Association has been the lead partner in the project. Its Project Manager, Ian McLaughlin, said:

“We are here to acknowledge the courage and sacrifice of the Polish airmen in the Battle of Britain, and equally to send out a message to our neighbours and fellow citizens in the Polish community that they are welcome and valued members of our society.”

“This mural showing the famed 303 Squadron will very effectively revive the memories of the Battle of Britain and the dedication and sacrifice of those from around the world who maintained and flew the aeroplanes.”