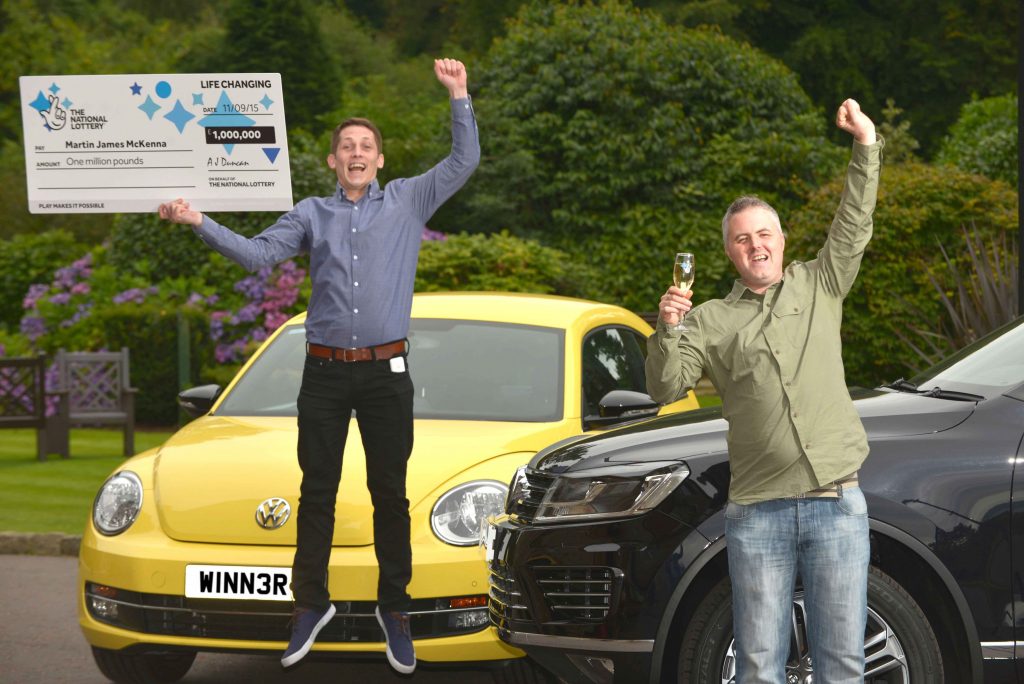 Martin McKenna (35) (green shirt) celebrated a life changing moment with one of his friends, Gerard, after the County Down man scooped a massive £1,000,000 top prize on a National Lottery Millionaire 777 Red Scratchcard, from National Lottery GameStore.

LIFE has changed for a Co Down man during a recent trip to his local supermarket as he scooped the massive £1,000,000 top prize on a National Lottery scratchcard.

Martin McKenna, a 35-year-old bank worker, bought the Millionaire 777 Red Scratchcard, from National Lottery GameStore, following a request from his girlfriend, Ceri, also 35, to pop to Tesco to pick up a few items for dinner.

Martin explained: “Whilst I was at Tesco I decided to buy two scratchcards before I went into the supermarket to begin my shopping.”

He continued:  “I scratched one first and was delighted to see that I had won £20.  I decided to collect the money so I joined the queue again and whilst waiting to be served I scratched the Millionaire 777 Red Scratchcard and was stunned when it revealed that I’d won a whopping £1,000,000!”

Martin’s first thought was that he was being pranked. He explained: “I couldn’t shake the idea that someone was pranking me and that the scratchcard wasn’t real.  I left the queue and continued my shopping as I tried to process what was going on.  I simply couldn’t believe that this was really happening.

“After paying for my shopping I decided that I would collect the £20 I had won on the first scratchcard before I left the supermarket.”

It was then that Martin decided to check the validity of his Millionaire 777 Red Scratchcard with the cashier.

“When I look back now I think I was in shock.  So I asked the cashier if the scratchcards they sold were all real to which he replied that they were all genuine.  It was then I revealed to him that I thought I’d just won a lot of money.”

Martin continued:  “I went to the car and sat there for a while in a state of disbelief.  On the short drive home I thought about how I would reveal the incredible news to Ceri.

“As soon I walked through the door she was holding a big pot of spaghetti so I told her to put it down, that I had some news for her.  She saw by my face that something wasn’t right and immediately thought I had something bad to tell her.  However, when I told her that I’d just won £1,000,000 on a scratchcard she just couldn’t believe it – in fact she didn’t.”

In a bid to convince his girlfriend that the scratchcard was genuine, he asked her to invite trusted friends to their home who could verify the win.

“She asked me to text a couple of friends of ours, Gareth and Gerard, but I didn’t tell them why I wanted them to pop round.   When they arrived and looked at the scratchcard their reaction too was complete disbelief, so they weren’t much help in convincing Ceri.  However, after a few moments the news really sunk in with them all.  We couldn’t even shout and scream with joy as our young son was asleep upstairs in bed – but believe me we were screaming on the inside.”

Martin has big plans for his winnings and explained:  “I want to buy a new house, clear my debts and treat my family and friends.  I’ve also always wanted to own a Volkswagen car so I will be visiting a showroom as soon as I can to buy one for myself and one for Ceri.”

GameStore is the new home of scratchcards and online Instant Win Games from The National Lottery, offering players many different and exciting ways to play and win life changing prizes.

In Martin’s own back yard of County Down National Lottery funding has helped: