MCGUINNESS: THERE SHOULD BE NO PRECONDITIONS TO TALKS 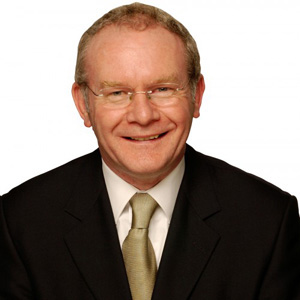 SINN Féin’s Martin McGuinness has said there should be no preconditions or pre-determined outcomes to all-party talks.

The MLA said that if the talks did not break the deadlock, then elections to the Assembly should be called.

Secretary of State Theresa Villiers is holding separate talks with the five main political parties this afternoon at Stormont House.

The Ulster Unionist Party pulled its Minister Danny Kennedy out of the Executive.

And last week DUP leader Peter Robinson and three of his Executive Ministers resigned leaving Arlene Foster in temporary post of First Minister and her current brief of Finance Minister.

Mr McGuinness said: “As we face into a new talks process there can be no preconditions or pre-determined outcomes.

“Most importantly there should be no delays in commencing these discussions.

“We are approaching these talks in a constructive mood to find a resolution to the current challenges and that should be the aim of all parties.

“If however, a resolution cannot be found, then the next logical step is an election.

“If that is the case Sinn Féin welcomes the opportunity to take our message of challenging Tory austerity to the electorate.”