U2 TO PLAY TWO BELFAST GIGS 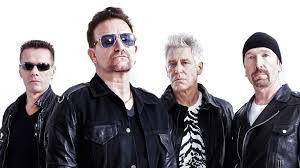 ROCK rock band U2 are set to play two concerts in Belfast as part of six “homecoming gigs” in November, with four shows planned for Dublin.

They will play Belfast’s SSE Arena, formerly known as the Odyssey, November 18 and 19 – their first Belfast tour date in 18 years.

U2 are currently on a European tour to promote their latest album, Songs Of Innocence, released last October.

In recent interviews, band members had raised doubts over whether they would be able to announce Irish dates for their latest tour.

In Italy on Saturday, U2’s lead guitarist The Edge said: “This show is designed for a type of venue and unfortunately there isn’t one, certainly in the south [of Ireland].

“I think there might be one in the Belfast area, so we’re looking at that as well. But you can’t invent a venue. It’s either there or it isn’t.

“So, we’re doing a lot of head-scratching right now to see if we can figure out something.”