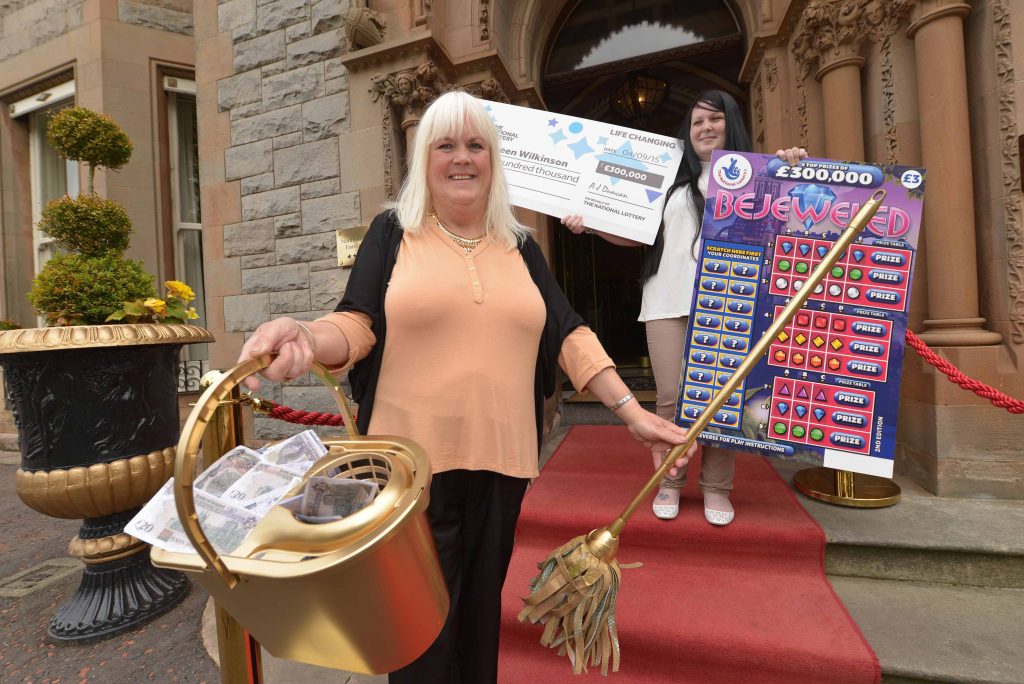 CLEANING UP: (l-r) Belfast cleaner Maureen Wilkinson (58) celebrates with her daughter Kimberley McCaughey at the five-star Culloden Hotel after scooping a massive £300,000 on a National Lottery Scratchcard. Maureen, from the Cregagh area in the east of the city, cleaned up when she matched three figures on the National Lottery Bejeweled Scratchcard that she purchased from her local Mace store in Greenway. The Bejeweled Scratchcard costs £3 and offers a 1 in 3.71 overall chance of winning a prize, which can range from £3 to the top prize of £300,000. Maureen has no plans yet on how shell spend all the money but already has her eye on a new three-piece suite for her home and, although she doesnt drive, a new car for the family.

THE floors are tiled with gold for a Belfast cleaner after scooping a massive £300,000 on a National Lottery Scratchcard.

Maureen Wilkinson (58) from the Cregagh Estate in the east of the city was being driven to work by her son Scott when she scratched her way to more than a quarter of a million pounds.

“You’re going to have to stop the car son,” she told him after matching three figures on the National Lottery Bejeweled Scratchcard she purchased that morning from her local Mace in Greenway.

“I couldn’t believe it,” said Maureen.  “I felt sick and was sure that I’d done something wrong.  I asked my son to stop the car but he couldn’t as we were in traffic but when we came to the next set of traffic lights, he had a quick look and told me that I hadn’t gone mad… and that I’d really won £300K.

“He dropped me off at work and I did my usual five-hour shift without saying a word to any of my colleagues, before going home to try and come to terms with what had just happened.  I certainly had an extra spring in my step at work that day though!

“I bought the scratchcard on a Sunday so wasn’t able to phone the National Lottery claim line until the next day when, much to my joy (and relief), they confirmed that I was a winner.

Maureen is a regular player of The National Lottery’s Gamestore scratchcards who also buys a ticket for the occasional EuroMillions draw.  Her Bejeweled Scratchcard cost £3 and offers a 1 in 3.71 overall chance of winning a prize, which can range from £3 to the jackpot £300,000.

“I do enjoy playing the scratchcards when I can and have won plenty of smaller amounts over the years,” she said.  “My biggest win until now was £200 a few years ago and I remember thinking that was big but never in my wildest dreams did I ever dream of winning this amount of money.  I really can’t believe it.”

Having won the top prize, Maureen has no plans yet on how she’ll spend all the money but already has her eye on a new three-piece suite for her home and, although she doesn’t drive, a new car for the family.

“I think I’m still in shock,” continued Maureen, who has been a cleaner for nine years, having previously worked in a local Chinese takeaway.  “I’ll not be going mad with my winnings and I won’t be leaving my job.  I plan to keep my feet well and truly on the ground and try to do what’s best with the money.”

Maureen lives with her long-term partner Joseph and has four sons, one daughter and three grandchildren.  She’s looking forward now to a special family Christmas.

“Christmas will be upon us before we know it,” she said, “but I’m looking forward to spending it, and I’m sure some of my winnings, with my family.  Thanks to The National Lottery, it looks like it’ll be our best one yet!”

GameStore is the new home of scratchcards and online Instant Win Games from The National Lottery, offering players many different and exciting ways to play and win life changing prizes.

The National Lottery has been changing the lives of winners like Maureen as well as communities across the UK for more than 20 years with players raising, on average, over £34 million for National Lottery-funded projects every week.

In Northern Ireland alone there have been well over 20,000 individual National Lottery grants awarded to individuals, organisations and projects across the arts, sports, heritage, health, education, environment, charity and voluntary sectors.

These include a £45 million grant for Belfast’s Odyssey Complex in 1997 and a £23.5 million award for the Connswater Community Greenway project which will reconnect the communities of East Belfast and restore its rivers as community assets, providing attractive and accessible parkland for leisure, recreation and community events and activities to the 40,000 people living in the area. For more information on National Lottery funding please visitwww.lotterygoodcauses.org.uk.