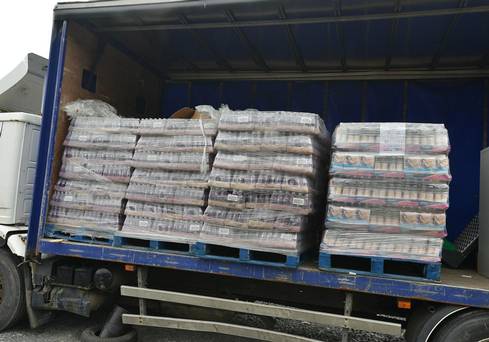 One of the lorries containing pallets of drink bottles

POLICE believe they have smashed a major fraud following the seizure of hundreds of drink bottles.

Searches were carried out at premises in the Derrybeg Lane area of the town yesterday as part of a joint operation between the PSNI, Food Standards Agency and the Northern Ireland Environment Agency.

Police said that two 40 ft trailers and a large quantity of bottled drinks were seized in the swoop.

A 54-year-old man was arrested in the town by detectives from the PSNI’s Reactive and Organised Crime Branch in relation to fraud offences.

He was arrested on suspicion of possession of and making or supplying articles to commit fraud, as well as suspicion of offences under the waste and contaminated land act.

The man was later released on bail pending further inquiries.