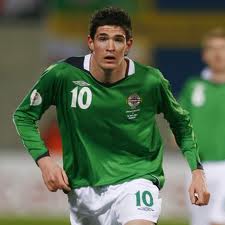 NORTHERN Ireland will be hoping to maintain their excellent European Qualifiers campaign to date when they visit the Faroe Islands tonight (kick-off 7.45 pm) in their Euro 2016 qualifier.

Michael O’Neill’s side have 13 points so far from their first six games in Group F.

The Green and White Army sit just a point behind group leaders Romania, who face a trip to third-placed Hungary.

A win tonight against the Faroe Islands and dropped points for Hungary could see the Irish facing the Romania at Windsor Park on Monday night knowing victory would secure their automatic qualification.

It would mean a first-ever European Championship appearance for Northern Ireland, and a first showing at a major tournament since the 1986 World Cup in Mexico.

But manager O’Neil insists they still need to focus on the job at hand.

“We have to make sure we win the game in the Faroes and then we’ll see what the scenario is on Monday,” said O’Neill.

Younger players such as Oliver Norwood and Stuart Dallas have impressed on the international scene for Northern Ireland.

However, but O’Neill believes his experienced stars have been vital in the progress they’ve made in their qualifying campaign so far.

“The younger players have definitely freshened up the squad, there’s no doubt about that,” O’Neill added. “But the key experienced players that you need for this campaign have been of great service to Northern Ireland.

“It would be fantastic for them to get the opportunity to play in a major finals.

“But going forward as a national team we are going to have to see the emergence of some players, but at the minute we have a good squad of players who mix very well together and seem to enjoy each other’s company.”

Chris Brunt is hopeful of playing a part against the Faroe Islands after sustaining a hamstring problem last week, while captain Steven Davis will be ready for both games despite missing training earlier this week.

Kyle Lafferty is expected to lead from upfront even though he has missed all of Norwich City’s opening matches this season through injury.