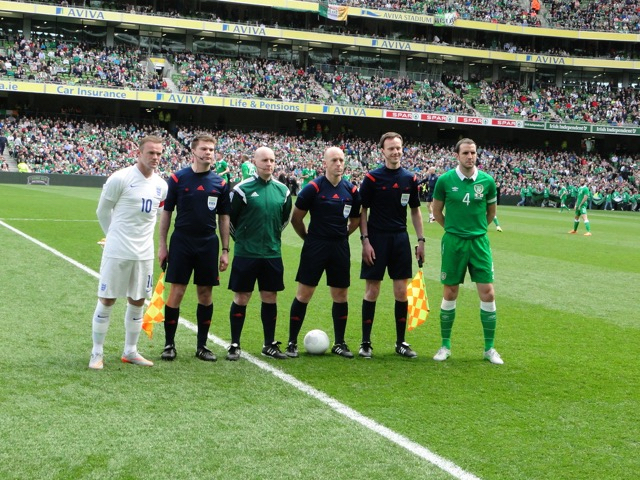 THEY say it is one of the most unpopular jobs in football – standing on the touchline in all weathers making decisions that sometimes neither fans nor players agree with.

But Gareth Eakin doesn’t care about the abuse he’s had to endure as he has now given his detractors the red card along with his fading eyesight!

The 36-year-old, who teaches at Clounagh Junior High School in Portadown, always dreamed of playing football.

But at 17 when his dreams were dashed, Gareth wanted to stay within the footballing family and turned his attentions to becoming a referee.

“When I realised I wasn’t going to make it as a professional player, the next thing for me was to consider refereeing and I started by completing by beginner’s course.

“From there the assessment detail was intense at various games were the Irish Football Association monitored my performance, fitness levels and decisions under pressure.

A highly respected referee, Gareth has over 40 international appointments under his belt running the line including during the Republic of Ireland versus England game recently at the Aviva Stadium in Dublin.

Here is pictured standing beside England captain Wayne Rooney before the match-day kick-off.

But as he was getting older, Gareth was finding his eyesight – a key component in his armoury as a referee or a referee’s assistant – was starting to lose its sharpness.

He said:  “I’d never worn glasses or contact lenses but for the last year he had noticed I was squinting to see things in the distance.

“I felt it more so particularly in the evenings when my eyes were getting tired after a day’s teaching.’’

Gareth was eager not to let his fading eyesight affect his performance on the field as one of only 10 internationally approved FIFA referees in Northern Ireland.

Now after successful laser eye surgery at the Cathedral Eye Clinic in Belfast, Gareth is now back onside and looking forward to the prospect of running the line during the forthcoming 2015/16 UEFA Champions League.

In fact, it was during a UEFA ‘sight and assessment’ test at the Cathedral Eye Clinic in Belfast that Gareth discovered there was room for improvement in his eyesight.

The Cathedral Eye Clinic, led by the renowned specialist Professor Jonny Moore, had been awarded the contract by UEFA to assess all new referees.

“The team at Cathedral Eye Clinic informed me that I could optimize my visual performance by undergoing the safest form of laser eye surgery available and that it would alleviate the eye strain I was starting to feel.’’

Because of his referring role, Gareth has a split second to make whether to raise his flag for offside or not – a crucial decision which could cost the advancing team a goal scoring opportunity.

Explains Gareth: “At the precise moment a team goes on the attack we are trained to take a ‘mental picture’ of the striker trying to outrun the defence.

“The accuracy of this ‘picture’, which is created through the eyes and processed by the brain, is then used to make a judgement rapidly with the flag either being raised for ‘offside’ or where the flag stays down allowing the centre forward clear to go on for goal.

“There is a margin for error and as referees we don’t always get it right, but the quality of seeing the action in the best possible detail at source ultimately determines the decision we make – so the quality of my sight and any room for improvement was something I was very keen to build upon.

“Professor Johnny Moore from The Clinic gave me a very clear and precise explanation of what the laser eye surgery procedure would involve, the outcomes that he expected in terms of vision improvement and recovery time.

“I have to say that the way the entire Cathedral Team conducted themselves gave me complete peace of mind.”

Gareth says he took some time to reflect on what he described as “a big step for me,” but opted to undergo the life-transforming surgery early in the New Year:

“I had total confidence in Professor Moore and his team. There were no surprises, I knew exactly what to expect and I have to say it’s been one of the best calls I’ve ever made.’’

And so much so that he is really seeing improvements on the pitch.

“Back now refereeing, I have more confidence and I’d say it’s given me a definite percentage improvement at the margin where decisions are made and games are ultimately won and lost.

“Like everything in life, if you keep your eye fixed firmly on the ball, you’ll succeed.

“Thanks to Cathedral Eye I now have fighter pilot vision and hope I can move my career to the next level,” Gareth enthused.