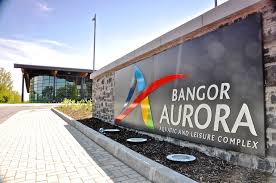 POLICE are on the trail of a man who tried to take images of a child in the changing room of a swimming pool complex.

The incident happened at the Aurora complex in Bangor, last month, but details have only emerged today.

Constable Adrian Bell said: “Around 3pm on August 15, a woman was in a communal changing area with her two sons, when one of the boys noticed that a mobile phone was being held over the side of a cubicle.

“The boy alerted his mother to this, and the mother challenged the male holding the phone.

“The male left the changing room.

“The man is described as aged between 20 and 30, with swarthy skin, heavy dark stubble and short jet black hair.

“He is around five feet eight inches tall, and at the time was wearing red shorts with a darker red stripe up the sides, a grey T shirt with a logo on the left side and Adidas trainers. The phone was described as purple and from the maker Samsung.

“Police want to speak to this man and anyone who recognises this description is asked to contact police in Bangor on 101.

“Or if someone would like to pass information anonymously they can call the independent charity Crimestoppers on 0800 555 111.”