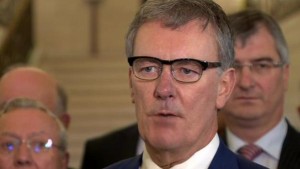 THE UUP’s ruling executive will meet this evening in emergency session over the deeping political crisis.

It is expect to ratify a decision by party leader Mike Nesbitt, supported by his MLAs, two MPs and one MEP to leave the Stormont Executive.

The meeting was called by party leader Mike Nesbitt after the PSNI said members of the Provisional IRA were involved in the murder of Kevin McGuigan.

He was shot dead as part of an internal republican dispute

But he added there was no evidence as yet that McGuigan’s murder was sanctioned by its Northern Command, General Headquarters Staff or the ruling seven-man Army Council.

Sinn Féin said the Provisional IRA had “gone away” after ordering an end to its armed conflict in 2005.

Earlier in the week Mike Nesbitt said Sinn Féin had “no credibility and we have no trust and without trust we have nothing”.

“The situation can be fixed but we need some clarity about the IRA and its command structure,” he said.

The DUP have not yet joined the UUP saying Sinn Fein should be excluded.