UUP TO QUIT EXECUTIVE OVER PIRA MURDER OF KEVIN MCGUIGAN 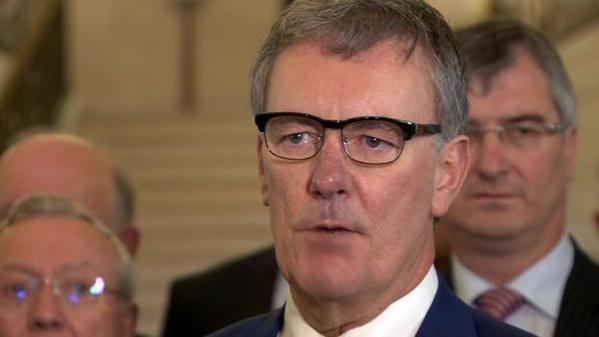 UUP leader Mike Nesbitt has confirmed that his it plans to leave the Stormont Executive over the Provisional IRA role in the murder of Kevin McGuigan a fortnight ago.

The Strangford MLA said he had made the recommendation during a meeting with senior party members including MLAs, MPs and its MEP Jim Nicholson who unanimously endorsed his view.

The party’s ruling Executive will meet this Saturday evening to ratify the recommendation.

The decision follows the statement by PSNI Chief Constable George Hamilton at the weekend that the Provisional IRA still existed and some of its members were involved in the McGuigan murder.

The UUP leader said if his party’s Executive endorse his recommendation, then he would lead his MLAs into opposition and Danny Kennedy would quit as DRD Minister in the Executive.

At a lunchtime press conference in the Grand Hall at Stormont, Mr Nesbitt said Sinn Féin had “no credibility and we have no trust and without trust we have nothing”.

“The situation can be fixed but we need some clarity about the IRA,” he said.

He said the DUP and Sinn Féin-led government had been “incapable of delivering positive outcomes”.