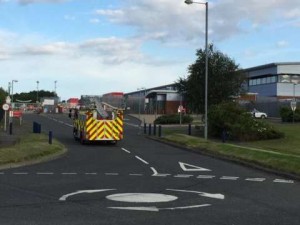 POLICE say a suspicious package discovered at the Royal Mail’s main sorting office at Mallusk this evening was “nothing harmful”.

Army Technical Officers, the PSNI’s Terrorist Investigation Unit and the Fire Service were called to Enterprise Way in Newtownabbey after a package containing white powder was found.

But the alert has now ended and the area declared safe for workers to return.

Royal Mail said it has received confirmation that the item was harmless and did not pose a risk to its workers.