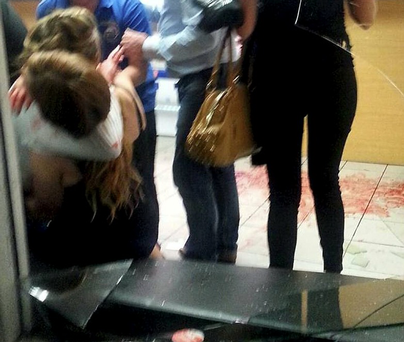 A teenage girl was left seriously injured after she was punched and pushed through a plate glass window in an attack at a kebab shop in west Belfast.

The 18-year-old was viciously assaulted at a fast food restaurant in the early hours of Sunday.

Sinead Quinn was taken to the Royal Victoria Hospital after a group men entered the restaurant on the Andersonstown Road and started attacking customers with sewer rods.

The woman was punched and pushed into a window which smashed.

She has since been released from hospital.

“Thanks for everyone’s concern. Might not be able to move or really turn my head but long runs the fox.”

A police spokesperson said: “Shortly before 2 am on Sunday police received a report of an assault at a food takeaway premises.”

“A young woman aged 18 was allegedly pushed through a glass window. She was taken to hospital.”

Police in west Belfast are appealing witnesses to the assault to contact them on the 101 non-emergency number.