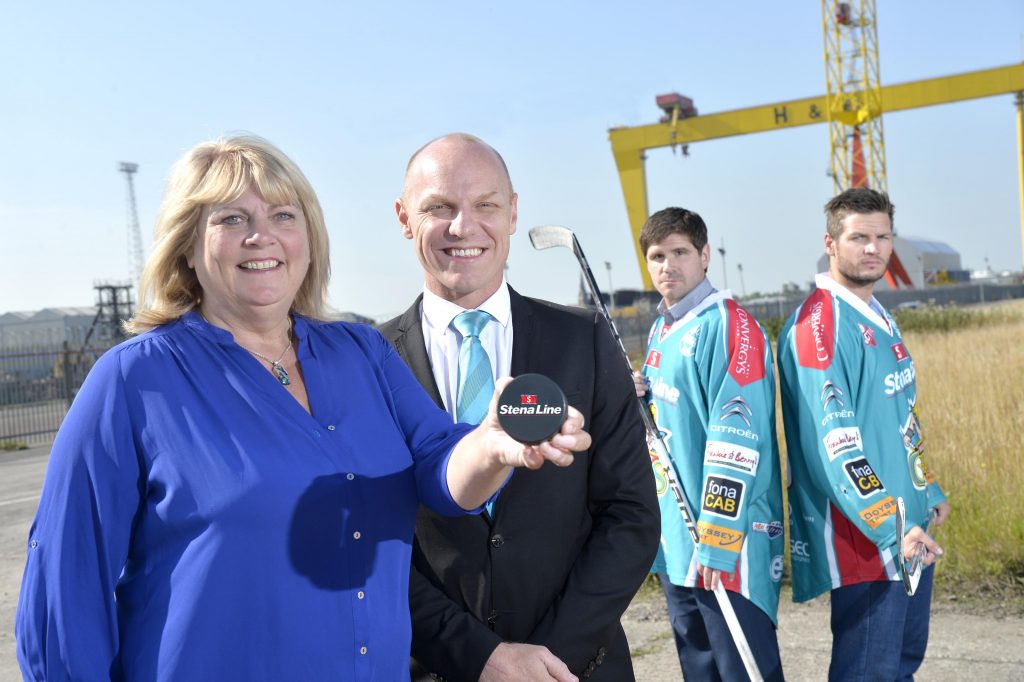 Diane Poole, Head of PR and Communications at Stena Line and Steve Thornton, Head of Hockey Operations at the Stena Line Belfast Giants celebrate with players Adam Keefe and Brandon Benedict after securing their biggest re-signing of the season as the leading ferry company announced that it will once again become the ice hockey teams title sponsor in 2015/2016, for the fifth successive year.

THE Stena Line Belfast Giants are celebrating after securing their biggest re-signing of the season.

For Stena Line have announced that it will once again become the ice hockey team’s title sponsor in 2015/2016, for the fifth successive year.

Stena Line has supported the Belfast Giants since 2008 and Diane Poole OBE, Head of PR and Communications at Stena Line explains why the sponsorship has proved to be such a success:

“Our partnership with the Belfast Giants is the perfect fit and we’re already looking forward to another thrilling season which will no doubt have fans on the edge of their seats.

“We know that the players can build on their fantastic previous achievements and will be aiming high for the 2015/16 season. Stena Line regularly transports the players, and their loyal fans, to away games in the UK throughout the season as well as visiting teams who come to Belfast for their matches – so we have got to know the players very well and have a real affection for them.

“We also enjoy teaming up for exciting events such as the Stena Line Belfast Giants Cruise and fans should keep an eye out for news on fun promotions happening over the coming months that will allow them to get up close and personal with their favourite players.

“The players are a huge hit with the people of Belfast as well as further afield and they are the team everyone else in the league wants to beat.  On behalf of everyone at Stena Line, and the loyal fan base who supports them at every match, home or away, we’d like to wish them all the best of luck for the coming season especially for the first home game on September 12 against Manchester Storm,” added Di.

“Last year we had an extremely successful year where we welcomed over 144,000 fans to the arena which has been the highest number ever during our Elite League era. We have some very exciting additions to the team this season including Brandon Benedict, Kris Beech, James Desmarais, Mike Forney, Mike Wilson, Jonathan Boxill, Matt Nickerson and our new head coach Derrick Walser. I am excited to see what this season will bring and am confident that we can go all the way to the top of the league this year.

“Stena Line’s patronage heralded one of the most successful periods the team has ever had so we’re delighted to be renewing our connection with the leading ferry company.

“We’ll also be continuing a lot of our outreach work and educational programmes with communities in Northern Ireland as well as lots of fun promotions for our fans so this is shaping up to be another very busy year,” Steve added.