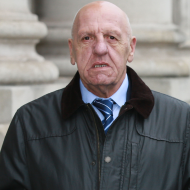 FOUR men and a woman – including three from Belfast – have been remanded in custody on IRA-related charges.

And one of them is veteran republican Kevin Hannaway – known as one of the ‘Hooded Men’ looking to overturn a European Court’s decision that he and 11 men were not tortured by the British Army following their arrest in the early 1970s.

The five were arrested on Saturday afternoon as part of an operation under the Offences Against the State Act targeting dissident republican activity in the Dublin region.

It was led by the Garda’s Special Detective Unit, Emergency Response Unit and Crime and Security Branch.

Kevin Hannaway (67), of Collin Mill, Belfast was charged with knowingly rendering assistance to an unlawful organisation styling itself the Irish Republican Army, otherwise Óglaigh na hÉireann , otherwise the IRA, whether directly or indirectly in the performance or furtherance of an illegal object on August 7th and 8th, 2015.

His co-accused Edward O’Brien (41), of Hazelcroft Road, Finglas, Dublin 11 and Eva Shannon (59) of Oakman Street, Belfast are charged with the same offence on the same date.

David Nooney (52) of Coultry Green, Ballymun, Dublin 11, and Sean Hannaway (57), of Linden Gardens, Belfast are each charged with membership of an unlawful organisation within the State, namely an organisation styling itself the Irish Republican Army, otherwise Óglaigh na hÉireann, otherwise the IRA on August 8th, 2015.

Det Gda Morgan said that he explained to the accused man the reason for his arrest in ordinary language and cautioned him.

He told the court Mr Hannaway replied: “I understand”.

Det Gda Morgan said that at the time he believed the accused man, who appeared before the court wearing a grey blazer and slacks, had committed the offence for which he was arrested.

Mr O’Donovan told the court that his application was for a remand in custody for all five accused.

Judge Martin Nolan, presiding, remanded the five in custody to appear before the court again on August 17th.