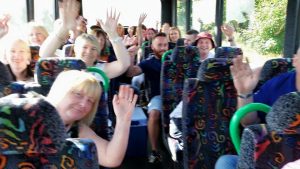 A NORTH Belfast woman needed 30 stitches to her face and lost five teeth after being hit with a brick during a sectarian attack on a bus in Co Derry at the weekend.

Sandra Major, 61, was on a bus returning from the Apprentice Boys parade when it was attacked in Dungiven on Saturday.

Four people were injured when it was pelted with bricks, stones and bottles.

Sandra has undergone specialist surgery in hospital to repair the full extent of the damage.

Her sister, Margaret Ritchie, was with her at the time of the attack, said the incident was “frightening”.

She told BBC Radio Foyle: “There was blood all over her face and glass everywhere.

“I was hit and was knocked off my feet.

“My sister was slumped over her seat and there was a big hole in the window.

“It was a brick that hit my sister. It was incredibly frightening.

“I shouted her name a number of times and there was no response.

“When I saw the state of her face it really shocked me.

“They had to remove glass from her face at the Ulster Hospital. She can barely speak and doesn’t really remember what happened.”

Ms Ritchie said her sister, who are both from Belfat, would have to have extensive dental work following the attack.

“We are all in a state of shock. She doesn’t think she will ever go on a bus again,” she told BBC Radio Foyle.

“We have been going to the parade for 15 years and never had any bother. There wasn’t one flag, no band uniforms and no chanting on that bus.

“We can’t blame the good people of Dungiven.”

A 16-year-old was later arrested over the attack but has since been released.

The attack has been widely condemned by politicians of all persuasions.

DUP MLA Nelson McCausland said: “The people who carried out the attack must have known that hired buses passing through the village were bringing people home from the parade in Derry.

“This was a sectarian attack and should be treated as a hate crime.”

Sinn Fein deputy First Minister Martin McGuinness tweeted: “The stoning and injuries to passengers on a bus in Dungiven returning from the Apprentice Boys parade in Derry was shameful.

“I strongly condemn it.”