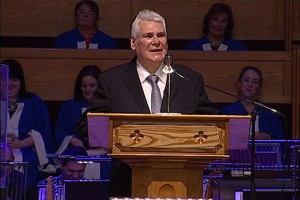 PASTOR James McConnell has appeared in court this morning over charges relating to comments he made about Islam.

He received a summons to appear before Belfast Magistrates’ Court for allegedly inciting hatred.

Following a short hearing, the case has now been adjourned until September 3.

As he left Laganside court complex, Pastor McConnell was cheered by a large crowd of waiting supporters.

Outside, his solicitor said it was the “most bizarre case he had ever seen before the courts”.

The Public Prosecution Service said it made the decision to go to court after Pastor McConnell refused to accept and informed warning.

The well know preacher arrived at the Laganside court complex surrounded by family and friends.

He told waiting reporters: “It is a nice day for it.”

Pastor McConnell stepped down from his ministry at the Whitewell Metropolitan Tabernacle in north Belfast last September citing ill health.

During his sermon at the church last year, Mr McConnell had told his congregation: “Islam is heathen, Islam is satanic, Islam is a doctrine spawned in hell.”

He said he agreed with the late MP Enoch Powell, whose 1968 “Rivers of Blood” speech criticised immigration.

“Enoch Powell was a prophet, he called it that blood would flow on the streets and it has happened,” he said.

The evangelical Protestant preacher also compared Muslims to the IRA.

“Fifteen years ago Britain was concerned of IRA cells right throughout the nation,” he said.

“They done a deal with the IRA because they were frightened of being bombed.

He later apologised but when asked about his remarks regarding radical Islam, Pastor McConnell commented “I still believe that radical Muslim ideology and doctrine poses a huge threat to this country and to the world.

Earlier this week the pastor said he was prepared to go to prison for his religious beliefs but vehemently denied that he was a racist.