DETECTIVES from the PSNI’s Major Investigation Team probing the murder of Jennifer Dornan last Sunday have released a photo of a knife similar to one which they believe was used to stab her through the chest.

It is almost 14 inches long and has distinctive orange and white markings.

Police believe a similar knife was used to stab 30 year old Jennifer before her home at Hazel View was set on fire.

The officer leading the investigation, Detective Superintendent Kevin Geddes from MIT said: “I can confirm that Jennifer was stabbed during the attack early on Sunday morning.

“We are appealing to anyone who has come across a knife like this since Sunday to contact us.

“We are grateful to the community for the enormous amount of assistance they have provided in the past few days and would ask for their continued support.

“We are following a definite line of enquiry. A 39 year old man remains in custody being questioned about withholding information. Other enquiries are continuing. 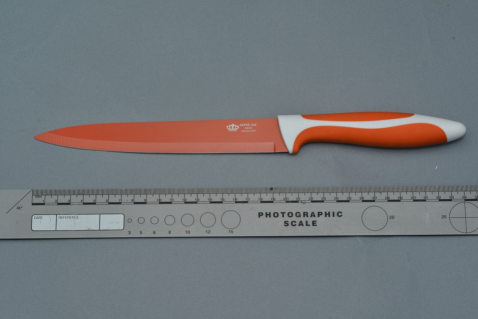 “We are particularly interested in the movements and whereabouts of a man seen leaving Jennifer’s home at 4.20am on Sunday.

“We believe he walked from Hazel View, through Lagmore to Poleglass. We believe he was wearing a grey tee-shirt or sweat top and a light coloured bomber jacket.

“At some stage, we believe he got rid of the grey top and light coloured jacket and obtained a red and gold sports jersey.

“We are appealing to anyone who lives on the route between Hazel View and Poleglass and who has knowledge of any of these items of clothing or the knife to contact us.
“I would ask people to ring detectives on the non-emergency number 101 or use the independent charity Crimestoppers number 0800 555 111if you don’t want to provide your details.”