FRANKIE BOYLE GIG TO GO AHEAD DESPITE FESTIVAL ORGANISERS APOLOGY 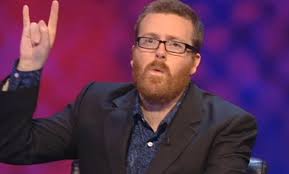 THE organisers of a west Belfast festival have said they are “deeply sorry for any hurt or offence that has been caused” by inviting offensive comedian Frankie Boyle.

The Scottish comic is due to perform at Féile an Phobail festival next week.

But there has been strong opposition to his coming from families of disabled children after he made hurtful jokes about those with Down’s syndrome.

Opponents had demanded the show’s cancellation because of jokes Boyle has told about people with Down’s syndrome during a live concert in five years ago.

Mum Roisin Curran, who has a Down’s syndrome daughter Mia, said Boyle should not be playing at the festiveal.

On Monday, Féile for All had a “frank and useful meeting” with the organisers, who said afterwards the gig was still happening.

On Wednesday evening, in a statement, Féile an Phobail said it had taken the criticism levelled at it “extremely seriously”, and “appreciate that there has been a deep sense of hurt caused with the booking”.

They said they “had in no way set out to come into conflict with any section of the community and are deeply sorry for any hurt or offence that has been caused”.

“Féile an Phobail finds the mocking of the disabled totally unacceptable,” the statement added.

“Going forward, a number of ideas were jointly posited by Féile and the Féile For All group, which included a range of effective measures that Féile would put in place to avoid a situation like this arising in the future.

“Other key ideas that came out of the meeting included; nominating a representative from an organisation representing the interests of people with a disability to sit on the Féile entertainments committee; Féile’s continued outreach, dedication and support to disability groups – in terms of advocacy, funding, fundraising development, accessibility, participation and inclusive performance.”

They said there was also an undertaking by Féile management to represent the concerns of the group to Boyle’s management.

“Both parties are acutely aware of the difficulties that the event has created, and are committed to working together in future to ensure that Féile an Phobail remains fully inclusive and can be enjoyed in its fullest by all sections of the community,” the statement added.

In its statement, the Féile for All group said it felt “real and deep hurt” by Boyle’s comments and felt “that Féile, by extension were condoning the same, contrary to their ethos of inclusivity”.

“Attacks on the disabled, either verbal or physical, will always be wrong,” they said.

“While the gig will continue on this occasion, we remain firmly opposed to this act appearing at our festival. “We believe, however, that we have run an extremely successful campaign.”

They welcomed the new measures and said “they looked forward to working with Féile when planning future events”.