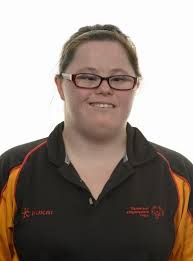 She secured gold in the Ribbon and Rope events with silver coming in the Ball and All Round categories.

The games are being held in Los Angeles, USA.

Her delighted mum Elizabeth said: “I’m so proud – the tears are in my eyes watching Kirsty. She’s just amazing.

“The whole family is so proud of her. There are four of us out here in LA supporting Kirsty – myself, my brother and his wife and my son,” added her mother Elizabeth.

“She’ll be a celebrity when she gets home – everyone will shake her hand and congratulate her. They all love her back in Belfast – everyone loves her.”

Ireland’s medal tally has now hit 15 so far in the competition.

He said: “Our congratulations go to all of the athletes and particularly Ulster’s Kirsty Devlin, who won the first gold medal for Team Ireland and four medals in total, which is a sensational achievement.”

Devlin also finished fourth in the Hoop while Peter Malynn of Mulligar won Ireland’s third gold in the Bocce singles.

LA Galaxy and Republic of Ireland captain Robbie Keane cheered on Ireland’s 11-a-side team against Bangladesh in their opening game, which they lost 4-1.