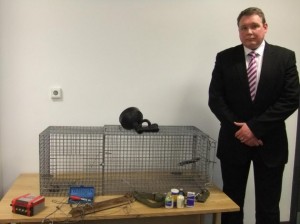 DETECTIVES are appealing for witnesses following a number of distraction burglaries in North Belfast last week.

On Wednesday 23 July police received a report that a male had called to Glenside Parade informing the householder that they had qualified for a steel door to be fitted to the rear of the property and that they needed to take measurements.

The male came into the house, he did not take any measurements but talked on his mobile phone.

The male is described as thin, black hair with a southern accent, wearing glasses and a grey V neck jumper with a white shirt and jeans.

The following day, Thursday 24 July also in Glenside Parade police received a report from a resident stating that when she got up she found her back door open and that a sum of cash had been taken from her handbag.

Also that day, police received a report that two men called to a property in the Linen Grove Area.

They were claiming to be from the Water Service and wanted to see the water taps at the back of the property.

They came into the house and looked around. They are also described has having a southern accent. It is not believed that anything was stolen during the incident.

Detective Inspector Pete Mullan said: “I am appealing for anyone who witnessed anyone acting suspiciously in the area or anyone who many have information which could assist with the investigations to contact Detectives at Musgrave Police Station on the non-emergency number 101 or information can also be passed anonymously via the independent charity Crimestoppers on 0800 555 111.”