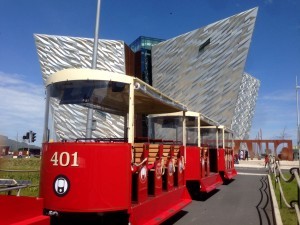 PRACTICALLY every city you visit there is a we train that runs tourists around the interesting parts. And for years I have always wondered why Norn Ireland does not have one.

And I assumed quite rightly that the road service would be dead against it. For example in any other city I have been to, Taxi’s are allowed to use the bus lanes, nope not here in Belfast the only taxis that are, are Black Taxis, but I hear you scream private hire taxis do the same job. They do but the idiots in our local authorities, (who pay thugs to have bonfires on the 12th July) refuse to allow private hire Taxis to use the bus lanes, its ridiculous.

Well someone has taken on the authorities and finally won, and all I can say is well done Chris Bennett for your fortitude and determination. Chris has finally managed to get a wee tram service up and running in Belfast.

The Wee Tram is a brand-new hop-on-hop-off tour of the Titanic Quarter.  Visit the birthplace of Titanic… where you can experience the story of the shipyard… get close to giants… and rest yer wee legs!

In 1912, Titanic’s builders were transported to and from the shipyard by frequent, pollution-free, electrically-powered trams. And now, in the emerging and inspiring surroundings of the Titanic Quarter, the tram is back!

Wee Tram passengers travel in carriages purpose-built to echo the outlines, proportions and colour schemes of the 1912 tram cars – and just like the originals, electricity provides the motive power.

Passengers can even echo the past themselves by wearing their very own Edwardian ‘duncher’ (the yardman’s flat cap)!

The tram route is a ‘figure-of-eight’ continuous loop with its centre at the iconic Titanic Belfast, the world’s largest Titanic visitor attraction.

The route also brings you up close and personal with historic Titanic landmarks – the Drawing Offices where she was designed, the Slipways where she was built and launched, and the Thompson Dock where she was fitted-out and stood on dry ground for the last time.

The route also visits the host of creative new enterprises and initiatives in the area such as the Movie Studios located in an old shipyard shed, T13 Urban Sports Park, the Odyssey Arena and Pavillion, Northern Ireland Science Park and Public Records Office of Northern Ireland.

The story of the Titanic Quarter comes to life on board. You’ll hear amazing stories of the shipyard, with photography, video material and local knowledge on screens in each tram carriage.

Tickets are valid for two days of unlimited hop-on-hop-off travel and cost £6 (adult), £5 (concession – children, students, seniors) and £20 (family – up to 2 adults/4 children).

Visitors with a valid Titanic Belfast ticket get a special discounted rate of £5 (adult), £4 (concession) and £18 (family)!

Simply hop on at any one of the eight stops all across Titanic Quarter, and buy tickets on board via cash or card.

Children must be supervised by an adult at all times. The tram is wheelchair-accessible and has rain covers, making it a great wet-weather day out!

For more information check out www.theweetram.com