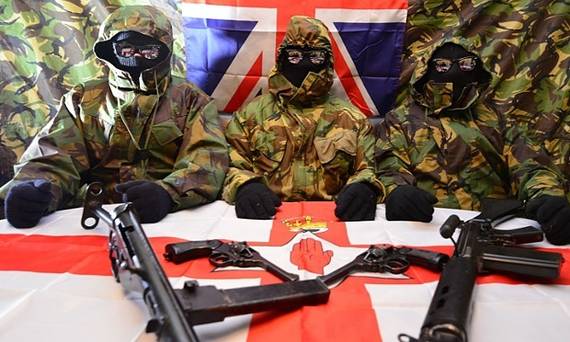 AN armed and shadowy loyalist group has issued death threats against PSNI officers and members of the Parades Commission.

The unnamed group released images this afternoon showing three masked men in paramilitary style clothing sitting at a table with what appear to be two handguns along with two semi-automatic weapons.

“After last night’s brutal assault upon the PUL community and the random firing of baton rounds aimed to seriously injure our people we are left with no other option but to announce the PSNI and Parades Commission are legitimate targets.

“We do not want to take this course of action but our people have suffered enough over the last few years and we as disengaged and disgruntled loyalists feel like the time has come for us to take action.

“We are aware that a very concerning photograph and statement have been circulated to some local media outlets today which we are investigating.

“Threatening the lives of serving police officers, staff and members of the Parades Commission for simply doing their jobs, is sickening and deplorable,” Mr Martin said.

He added: “Threats against police or any other body, have to be completely rejected and condemned by society and I am sure that the vast majority of people will stand with us and roundly denounce these vile threats and the individuals who made them.”

Detectives from the PSNI’s Terrorist Investigation Unit based at Ladas Drive in east Belfast have now launched an investigation into the images and the death threats.