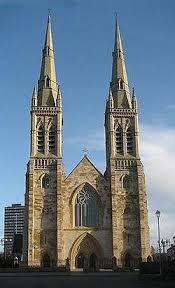 DETECTIVES in Belfast are investigating the report of an aggravated burglary at St Peters Cathedral in the Divis area last night.

Two men, one of whom was believed to have been armed with a firearm, gained entry to the cathedral at around 9.30 pm on Monday, July 13.

A priest was assaulted during the incident. He had to receive medical attention for minor injuries.

The suspects made off from the scene with a sum of money.

Detective Constable Pauline McCalmont has appealed to anyone who witnessed any suspicious activity in the vicinity of the cathedral between the hours of 9PM – 11PM or who has any information to contact detectives in Musgrave on 101 or Crimestoppers anonymously on 0800 555 111.