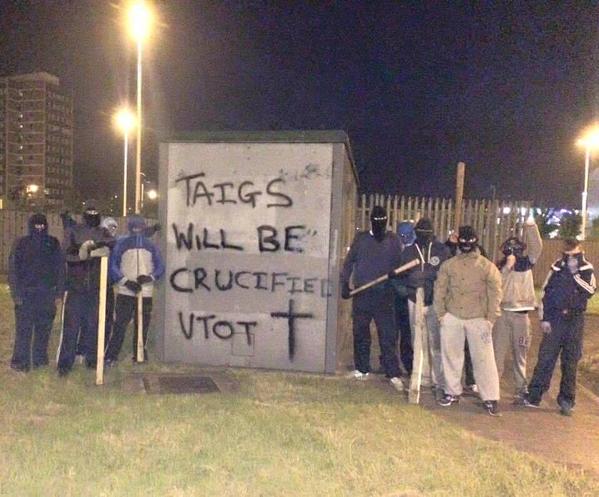 SINN Fein has called for the PSNI to investigate a sinister picture of up to 12 masked men posing with baseball bats and cudgels beside graffiti stating “Taigs will be crucified”.

Speaking today, west Belfast MLA Fra McCann said the image would “heighten tensions” in the run up to the marching season.

“The appearance of an image on social media with up to 12 masked loyalists armed with cudgels and baseball bats standing beside graffiti stating that “Taigs will be crucified” is extremely sinister.

“The picture was clearly taken at Broadway roundabout and will only heighten tensions as we approach the 12th of July.

“I will be forwarding this picture to the PSNI and reporting it as a sectarian hate crime. They need to investigate this image given the seriousness of the threat and appearance of masked men.

“I would urge everybody in the vicinity to be vigilant.

“I would also urge loyalist and unionist political and community leaders to condemn this publically and to do whatever they can to help any investigation into this.”