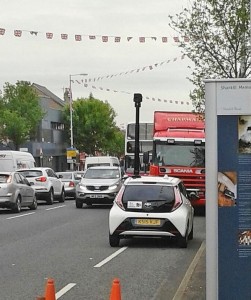 ROAD chiefs say over 1,200 drivers were caught in the first week of a new crackdown on the illegal use of Belfast bus lanes.

The have revealed that around 200 drivers on average a day were caught.

The crackdown began on Monday, June 22 with the introduction of six new bus lane cameras in the city centre and a mobile detection unit.

Since then, a total of 1,273 drivers have been caught.

The fixed cameras are positioned at:

The mobile detection unit is monitoring main roads into the city including the Shore Road, Lisburn Road and Ormeau Road.

Anyone caught breaching bus lane rules is fined £90, but the total is reduced to £45 if paid within two weeks.

A spokesperson for the department for regional development said 1273 penalty charge notices (PCNs) had been issued to motorists for driving in bus lanes or bus-only streets in the week commencing 22 June.

“Drivers are entitled to challenge their PCN through the process detailed on the back of all PCNs,” the spokesperson added.